V. Sethuram, president of the Indian Fine Arts Society, one of the oldest music sabhas of the city, passed away on July 4. It was a full life, for he was 93. But it marks the passing of a certain way of living — an older and more gracious world.

Almost three generations of South Indians grew up on stationery and, more importantly, pencils that his family business churned out, for he was a scion of the Vupputur clan that ran V. Perumal Chetty and Sons. Equally famous were the Hoe & Co diaries that the eponymous printing house, also owned by the family, brought out. There were other business interests as well, including being dubashes to the Railways. The Vupputurs were in the top order of the Arya Vysya community of old Madras, whose business heyday was from the 1850s to the 1950s. These Telugu-speaking Chetties left their imprint in diverse fields ranging from law and construction to industry, jewellery and trading. And the more successful built large houses in the Chetpet/Kilpauk area — huge bungalows, of which Vupputur House on Flowers Road was one of the largest.

Today, Mylapore may lay claim to being the bastion of Carnatic music but when the Arya Vysyas were at their zenith, it was George Town, their business headquarters, and Kilpauk/Egmore, where they lived, that most artistes aspired to perform in. Legend has it that when his community was exorted to found its own Sabha by T. Chowdiah, the famed violinist, the Indian Fine Arts Society (IFAS) came into being in 1932. B.V. Gopalakrishna Rao, an employee of the Corporation of Madras, was the founder but it was in reality bankrolled by the Arya Vysyas. T.V. Subba Rao, an employee at Hoe & Co, roped in the Vupputurs and that is how the family got involved.

But it was only in the 1950s that Sethuram and, more importantly, his older brother Emberumanar Chetty came to practically run the Sabha, with able assistance from N. Ramachandran, the sabha secretary. Between them, they moved it from George Town, where it had functioned from the historic Gokhale Hall, to Vani Mahal and later the German Hall in Habibullah Road. In addition, the family was also involved in the running of the 50:50 Club. The brainchild of S.Y. Krishnaswami, an ICS officer, the club held its programmes in SGS Sabha on Habibullah Road. Its name came about owing to its restricting membership to a hundred couples — with husband and wife being joint members and therefore having equal weightage. The programmes involved a concert, followed by dinner. Emberumanar and Sethuram were the club’s live wires.

At the IFAS, run by the brothers together with secretary Ramachandran and his brother Srinivasan, courtesy to performing artistes was an absolute must. During the 1980s, when Semmangudi, Balamuralikrishna and S. Balachander were hurling imprecations at each other like Nordic gods and many Sabhas took sides, the IFAS remained a venue where all three performed and often launched broadsides against their bete-noires, much to the delight of the audiences. With time, even as the Perumal Chetty and Hoe & Co businesses wound down, and IFAS could not count on that support, Emberumanar and Sethuram ensured that the Sabha became financially independent — sponsors came on board drawn by the sheer goodwill the brothers enjoyed. They knew everyone. “Call Sethu,” was one of the most frequent instructions of S. Muthiah whenever he had any questions about the old business families of Madras. 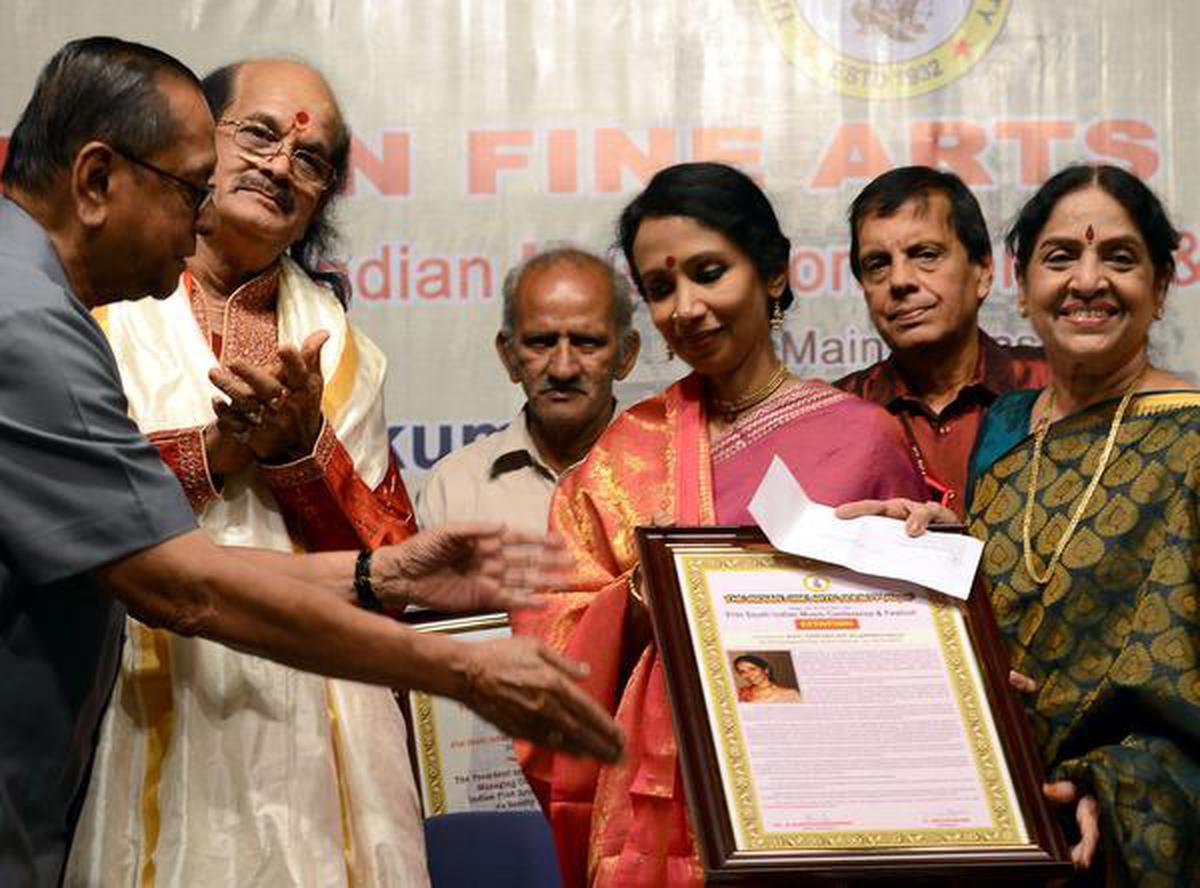 V. Sethuram presenting an award to dancer Alarmel Valli at the inauguration of the 81st South Indian Music Conference and Festival of The Indian Fine Arts Society in Chennai on Wednesday.

At the December Music Festival, it was customary for Emberumanar to stand at the gate of German Hall and welcome everyone in. After his passing, Sethuram became president and moved the Sabha to Ethiraj Kalyana Mandapam. He continued the tradition, even till a year or so ago, the only concession to age being a sofa near the entrance to sit on. Running IFAS was not easy and I asked him once why he persisted. “It is part of my life,” he said.

Calling on him and his gracious wife Sridevi, who predeceased him, at their Barnaby Road flat meant being welcomed by relics of Vupputur House — Thanjavur paintings, a hideous stuffed bear that doubled as a sofa, lovely lacquered screens and, of course, an old world hospitality. Sridevi was a talented veena player herself and one of her prized possessions was a miniature instrument, around 18 inches at most, that could be performed on.

Outside of music, Sethuram involved himself in numerous charities. He was also a pillar of Chinmaya Mission, Madras Riding Club and Bala Mandir Kamaraj Trust. His world of friends and acquaintances was large and he embraced everyone with love and affection. He was, as I said, among the last representatives of a different world.