With Women’s Day around the corner, we take a look at how an increasing number of women are interested in becoming priests and ‘qazis’, and what it takes to be one

Love found them easily but it took 10 months for Maya McManus and her fiancé Shamaun Ahmed to find an authority to solemnise their nikkah.

“It was quite the hunt,” laughs Maya, as the couple was keen on having a woman qazi conduct the wedding. “There was no information anywhere either online or in person,” she says. They got in touch with the Bhartiya Mahila Muslim Andolan (BMMA), Mumbai, and got a lead. And in December 2018, just a month before their wedding in Kolkata, Maya and Shamaun found Hakima Khatoon, their qazi.

“I didn’t know what the legalities were. Around the same time I saw a newspaper article that said it was legal for women to become qazis,” says Maya, adding that both her family and her fiancé’s were quite proud about this decision and there was no opposition.

Hakima, on her part, was delighted. “It gave me immense satisfaction to carry out such a big task successfully. Everybody was excited to see a woman qazi,” says Hakima of her first-ever tryst with this profession. An employee then with Nari-O-Shishu-Kalyan Kendra in Howrah, West Bengal, which counsels women and works with victims of domestic violence, Hakima says when the opportunity presented itself to train as a qazi in 2017, she signed up for it, along with her colleague Jamila Lasker.

“Before setting out to pursue my course in Gujarat and Mumbai, I spoke to the imam at the mosque and he assured me it was absolutely fine as there are equal rights for all in Islam,” she says, adding that during the lockdown, she was approached by a number of women who were interested in signing up with a woman qazi.

Recently, actor Dia Mirza’s wedding was officiated by a woman priest. The foray of women into priesthood is a progressive trend but not entirely new. In the ‘80s and ‘90s, Kolkata-based Gauri Dharmapal conducted a clutch of weddings, including that of actor Aparna Sen’s elder daughter. Gauri’s daughter, Rohini Dharmapal, who carries on the tradition is currently booked till 2023. “When ‘high’ society people engage a female priest it is more or less a style statement but when the middle class does it, it is a sign that the society is changing,” says Rohini.

“My mother was a Sanskrit teacher at Lady Brabourne College. She translated Sanskrit mantras into Bengali to make it understandable for all at the wedding,” says Rohini. Now Rohini and her team also explain the mantras in English if the bride and groom ask for it.

“One of the things that ma did was talk families out of performing kanyadaan,” says Rohini. In her capacity, Rohini also encourages families to do away with practices that are “considered regressive”.

She explains how, in the Vedas, the wedding is about promises that the couple makes to one another. Rituals like maala badal, sindur daan, kanyadaan… came much later. “Why should the bride alone wear sindur to depict that she is married? Why should she cover her face? Why should the mother of the bride not attend a ceremony? We don’t advocate wearing shaakha pola either. We do not force, we just educate. My son says we must reform with the times.”

Agrees Brahmaramba Maheshwari, a woman priest based out of Mysuru. “The bride is not an object. So why use the word daan?” she says. Since 2000, she has conducted more than 1,000 weddings as well as griha pravesh pujas, upanayana and homams. This awareness is spreading across India, and also the world. The current slew of Indian women priests have travelled far and wide from Detroit to Darjeeling binding people in holy matrimony. They also organise online classes for learners in India, Sweden, Australia etc.

Nagpur-based Sheela Tai Khanzode trained at a mandir in her city. “There is no fixed duration for the course. It depends on one’s grasping power. It could take six months to a year or more,” says Sheela. She started practising at around the same time as Brahmaramba. It was a male-dominated field back then, she says. “They asked, ‘why are you doing a man’s work?’ But as more people encouraged me, I went ahead with it.” She has noticed a lot more women entering this profession. “Shaadi havan is quite elaborate and it takes time to master it,” she adds.

With women becoming independent, they no longer want to adhere to age-old customs that take away from the progress society is making, says Sheela. She adds, “I was conducting a wedding in Bihar, where the bride’s mother was insistent on kanyadaan but the bride and groom refused,” says Sheela, adding that sometimes they are not just priests but also end up as the referee.

Rohini had to intervene when a family brought their daughter who did not want to wear sindoor. “They expected me to take up for them but I, of course, was on the daughter’s side,” she says.

More than over-the-top rituals, what is important is to understand what the Veda says, adds Brahmaramba. “It says commitment is very important. Once you hold hands, you don’t leave. I explain everything in detail so the participants at the ceremony understand what the mantras mean,” she says, explaining the meaning of the word vivah. It comes from vi meaning special relation between body, mind and soul, and vah meaning vahana, a vehicle that carries them ahead. 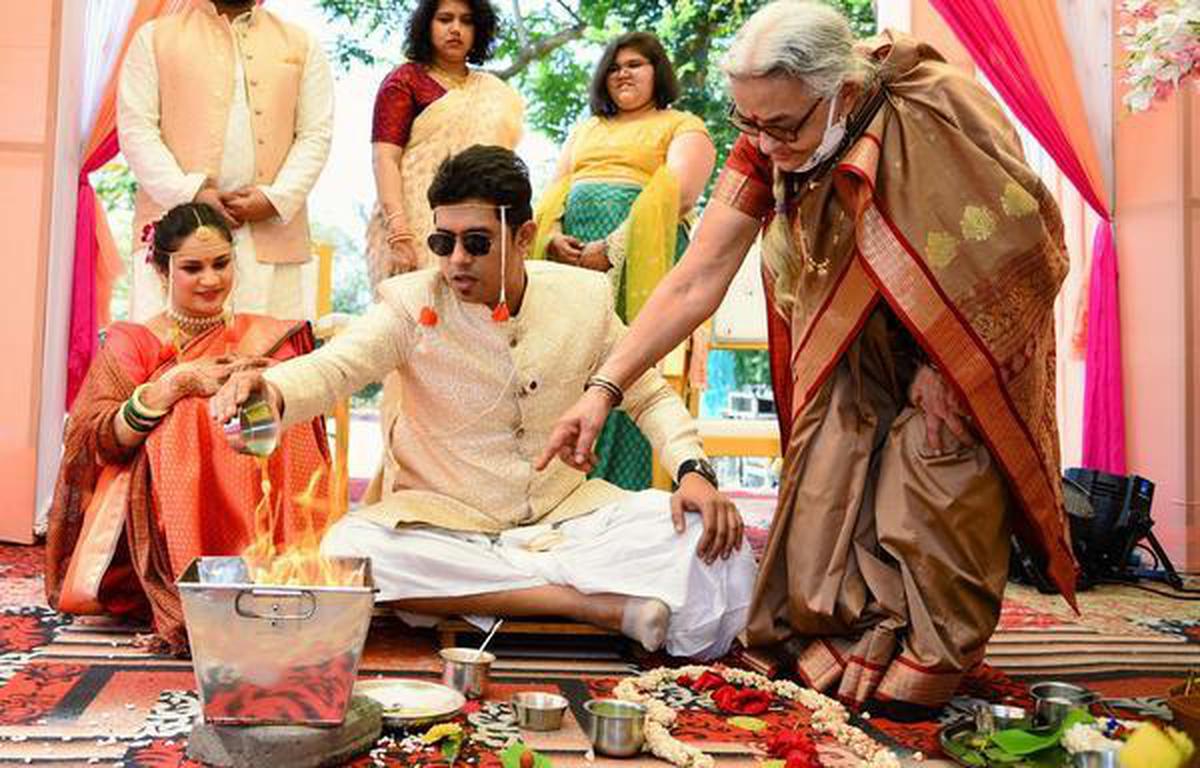 For Rohini, what gives her satisfaction is when the couple chants the mantras together and understands each word. “They are able to understand it because I translate it for them,” she says. As a result, people who got married 50 years back want to get married again to better soak it all in.

“A couple celebrating their 10th anniversary in 2022 has already booked me to conduct their wedding all over again,” laughs Rohini. She and her team of six believe in a practical approach. The idea is to modernise it; the rituals are about an hour long.

“In the Upanishads it is mentioned, mata nirmata bhavati means mother creates everything,” says Brahmaramba. “We are the boss, so why should we not choose to profess whatever we like.”

TMC calls for adjournment of Parliament session as a result…