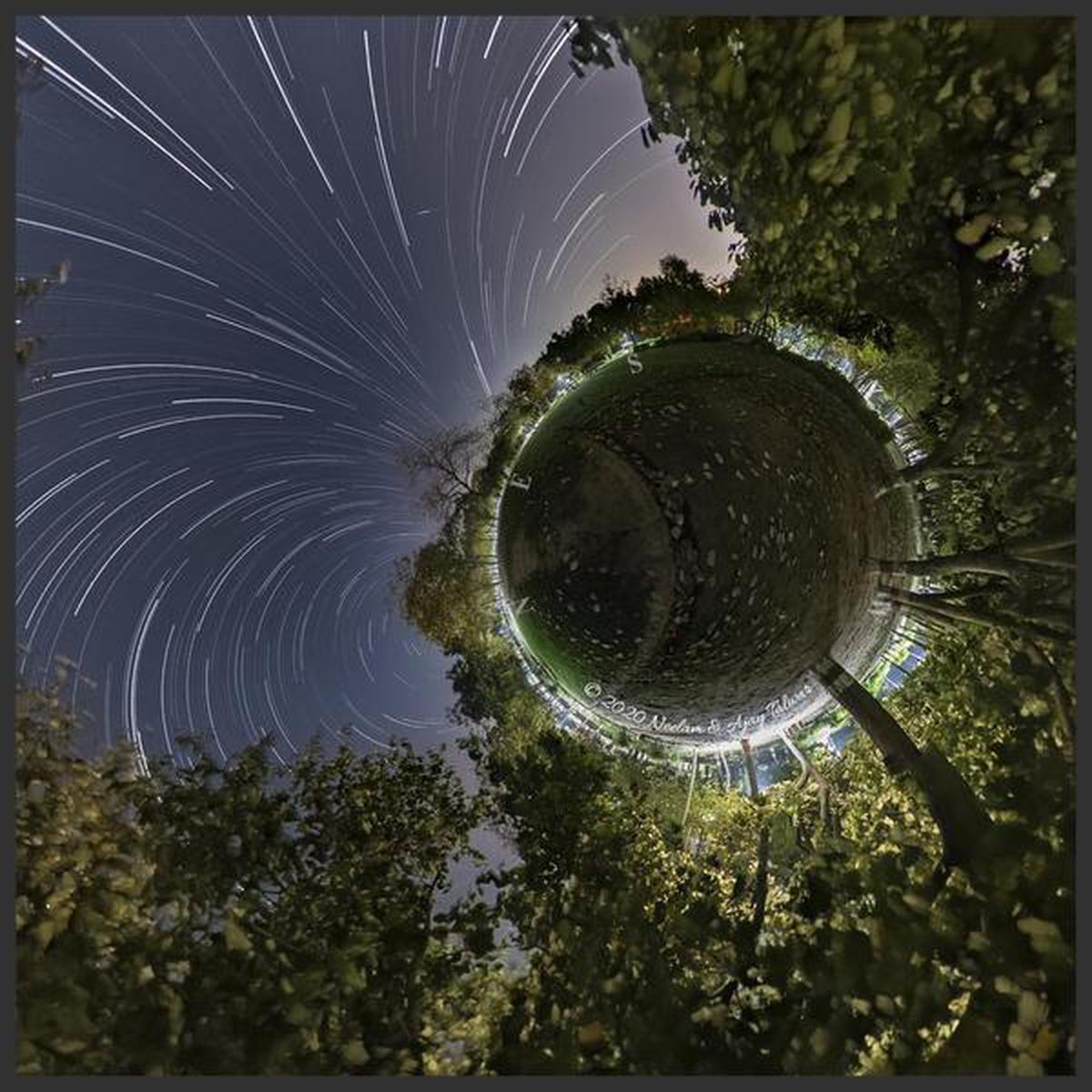 Astro-photographer Ajay Talwar is waiting for the nine-minute “lightout” at 9.00 pm on April 5 to document the sky. Unable to travel to his studio at Majkhali in the Himalayas, he is making the best of the rarified air and skies above his home, in once thickly polluted Gurugram.

The current 21-day lockdown, to tackle COVID-19, has resulted in lowered pollution levels, which have in turn lead to clearer air, less noise and light. This seems to be a good time to reconnect with the Universe, to sky watch and star gaze. The Prime Minister’s suggested symbolic gesture of unity — of lights going out across the country — will reduce light pollution significantly. And in that nine minutes, Ajay says the vast sky will come alive.

“Because of lower pollution, I have been able to watch Venus in the daytime with the naked eye. The night sky from my terrace now is densely packed with stars. In the morning, you can see the belt of Orion; also Sagittarius and Scorpio, which are constellations in the southern skies. Their speciality is that Sagittarius marks the centre of the Milky Way and Scorpio straddles the Milky Way. This was impossible with heightened pollution,” he says.

The coming weeks hold two special celestial events for sky watchers — sighting the pink moon (the largest full moon of the year) on April 8 and sighting the comet Atlas, in Ursa Major (the Saptharishi, the largest constellation in the Northern sky) that promises to brighten up and turn visible to the unaided eye in the coming weeks.

Get lucky with the Shooting Star

Some other aspects of the sky that he can now revel in are the rising and setting moon till the horizon, of Venus inside the star cluster, Krithika or The Seven Sisters , which is Pleiades, a star cluster of 1,000 stars of which 10 can be visible in ideal viewing conditions. Seven of the young, blue-hot stars are prominent among this cluster that is 450 light years away and in the constellation Taurus. He has made a video of the recent conjunction in this period of isolation. “The latter can be seen easily in places where there is no pollution like in the deserts and the mountains, but watching it in Gurugram has been exciting,” says Talwar who is doing deep sky photography of galaxies in Ursa Major during the lockdown. “It is unimaginable that I could photograph the galaxies from here but I am doing so now.” He also speaks excitedly about photographing the shadow of the Earth, of a dark band rising in the East at sunset, in Gurugram, “all possible at this point due to clear air”.

This Tiny Planet panorama was shot on April 2 between 4 am and 5.15 am at Gurugram, the trails of Jupiter, Saturn and Mars rising from the South-East direction can be seen
| Photo Credit:
Ajay Talwar

In How We See The Sky – A Naked Eye Tour of Day and Night (2011), astronomer Thomas Hockey finds the sky to be a receptacle of our existential queries — doubts, fears and hope. “To understand ourselves, I believe the sky still matters. For when early people looked up at, and thought about, the sky, they really were trying to answer what is perhaps the most human question of all: Where am I? What is my place in the universe? So are we,” he wrote.

Anand Narayanan, teacher and researcher in Astrophysics, Indian Institute of Space and Science Technology (IISST), Thiruvananthapuram, reiterates Hockey’s theory. “The sky has kept human curiosity at its brink down the ages. It is one of the major sources of inspiration, a portal to stretch our imagination, for poets, scientists, and photographers. The lockdown cuts stray light and is therefore a good time to delve into the cosmos with sky watching and star gazing,” says Narayanan.

A dimension of wonder

Putting these niche activities in perspective, he says, it is the dimension of wonder that is the activity’s biggest draw. “We live a fast-paced life but the sky is slow changing. A star will be there hours later when you look at it. The deeper aspect is that the light from the stars started out their journey many years ago —100s, 1000s,10,000s — the stars are that old. So when we are star gazing we are travelling back in time, we are looking at a journey that began 1000s of years ago and it ends in our eye,”says Anand, adding “That slice of universe enters us; we are engaging with it. It is a fascinating aspect that can also be meditative.”

Watching the Beehive Cluster (an open cluster – 1,000 stars – in the constellation Cancer, it is easily visible to the naked eye as a small nebulous cloud) for the first time in 1981, as part of an astronomy club in Chennai, Dr TV Venkateswaran, currently Senior Scientist with Vigyan Prasar, Department of Science in New Delhi, and an astronomy educator, says it was the startling beauty of the “ball of stars, in different shades of blue, with red flecks” that he was enchanted with. Earlier, watching Saturn had left him speechless. “Till then I expected it to have a malefic appearance but it is beautiful with its purple ring.” Saturn remains Venkateswaran’s favourite stellar connect. “Looking West during this week, he says, one can see Mercury, immediately seen after sunset, a bright object in the west. It is a rarity. In the night you will be able to see Jupiter, a prominent star. This time of the year you will be able to see enchanting Leo and Scorpio constellations.”

Shaji N, retired Prof of Physics from Maharaja’s College, Kochi, and currently Adjunct Professor, CUSAT, Kochi, holds astronomy classes for Kerala Shastra Sahitya Parishad (KSSP). His love for astronomy began in Madras 30 years ago. “With a small telescope (eight inches), you can see the rings of Saturn, the moons of Jupiter and craters on the Moon. I tell the students all the scientific information about the stars and planets but there are many books on related folklore.”

Prof Anandmayee Tej, Prof. Earth and Planetary Science at IISST-Thiruvananthapuram, has been star gazing extensively from her balcony of her home in Karikulam on the outskirts of the city. “It is a wonderful opportunity for people to enjoy the sky as air is clear and non polluted. What’s really good now is the availability of mobile apps that help one identify the stars and constellations.”

Venkateswaran too advises beginners to start with mobile apps like Night Sky, StarWalk 2 and Sky View. He also starts them off on two simple activities that help understand the constellation and the length of a year from the movement of stars. “Gandhiji learnt to star gaze in Yerwada Jail from an inmate. He has written extensively about that period of isolation and of the connect between star gazing and peace of mind,” he says.

Prof Joe Jacob, Associate Professor of Physics, Newman College in Thodupuzha and a visiting associate at Inter University Centre for Astronomy and Astro Physics, Pune, recalls watching the Milky Way — a trail of light like a patch — clearly with the unaided eye, three to four decades ago. But it is not possible now, he says, “especially in cities”. Of the April 5 event, he says, “Ideally because of less light and atmospheric pollution, more stars should be visible, provided the sky is clear.”

Talwar, meanwhile, is super excited at the prospect of documenting the sky on Sunday. He will be on his terrace with all his equipment that ranges from a small camera to 20-inch telescopes. And astronomy buffs across India will also be out on their balconies, gardens and terraces to travel back in time to the stars through the darkness.

2020-04-04
Previous Post: ‘Unorthodox’ assessment: A impressive tale of a lady discovering her voice in a deeply orthodox neighborhood
Next Post: Tokyo Olympics: Sports Authority of India to re-examine arrangements