Return of the local

Dilip Narayanan Nampi’s successful career in Dubai sank abruptly this March when the MNC he worked for handed him the pink slip in the face of losses borne during the coronavirus lockdown. The 40-year-old IT engineer, who is in Dubai since 2003, is hunting for a new job; his wife’s income, as an HR executive, won’t be enough, he says, to pull through in one of the world’s most expensive cities. “The pandemic has changed Dubai overnight. The barriers of class and status in the expat community have vanished. We are all at the mercy of the disease,” says a distraught Nampi.

With hirings in deep freeze, the clamour to give preference to locals in jobs growing and the oil economies of the Gulf region in a bind, Nampi’s chances of a bounce-back look bleak. Among his desperate options could be a return to his native land Kerala, a difficult choice that thousands of non-resident Keralites (NRKs) are contemplating as the Covid crisis pushes their lives into deep economic uncertainty on foreign land. At last count, 442,000 NRKs from across the world had registered online with the Kerala government’s NORKA (Non-Resident Keralites Affairs) department, expressing a desire to return to the state, some of them for good.

The first batch of NRKs, 370 people from the UAE, landed on the evening of May 7 in Kochi and Kozhikode, under the Indian government’s mission to evacuate its citizens stranded in various countries. At the time of going to press, a flight from Bahrain was slated to reach Kochi on May 8; a flight each from Kuwait and Oman were scheduled to arrive the day after. Air India plans to run 64 flights from around the Gulf region in the first week of the evacuation.

THE END OF A DREAM?

Since the 1970s, the six Gulf Cooperation Council (GCC) countries of Bahrain, Kuwait, Oman, Qatar, Saudi Arabia and the UAE have been dream employment destinations for the average Malayalee. Riding the oil boom in the Gulf, NRKs ushered in prosperity back home. Even war-ravaged Iraq was an attraction, for construction workers and nursing staff. An estimated two million NRKs work in the Gulf at present. In comparison, only 400,000 of them are employed elsewhere in the world.

Remittances by Indians, especially NRKs, from the Gulf region have been substantial, which is why any potential exodus from there back to India can have economic repercussions. A recent Crisil report says that of the $83 billion (Rs 6.3 lakh crore) India received in remittances in 2018, the Gulf countries accounted for 60 per cent or $49.8 billion (Rs 3.7 lakh crore). The UAE topped the remittance chart with $18.5 billion (Rs 1.4 lakh crore). Kerala’s State Planning Board estimates that of the Rs 85,000 crore remittance into the state in 2019, NRKs from the Gulf contributed 80 per cent (Rs 68,000 crore).

Developments this year are altering this rosy picture. On March 9, global crude oil prices fell almost 30 per cent, spooked by fears of a demand slump due to COVID-19 and price cuts announced by Saudi Arabia, the largest oil producer. Brent crude prices fell to $32 a barrel, and traded at $29.3 per barrel on May 5. “As crude prices nosedived, most companies began layoffs. Every sector in the UAE has suffered under its impact,” says John Thomas, a 34-year-old engineer with a construction firm in Dubai. He says companies that did not terminate people deferred salaries or sent workers and mid-level executives on leave for a few months. John has postponed plans to shift his family back in Kerala with him till the situation improves. 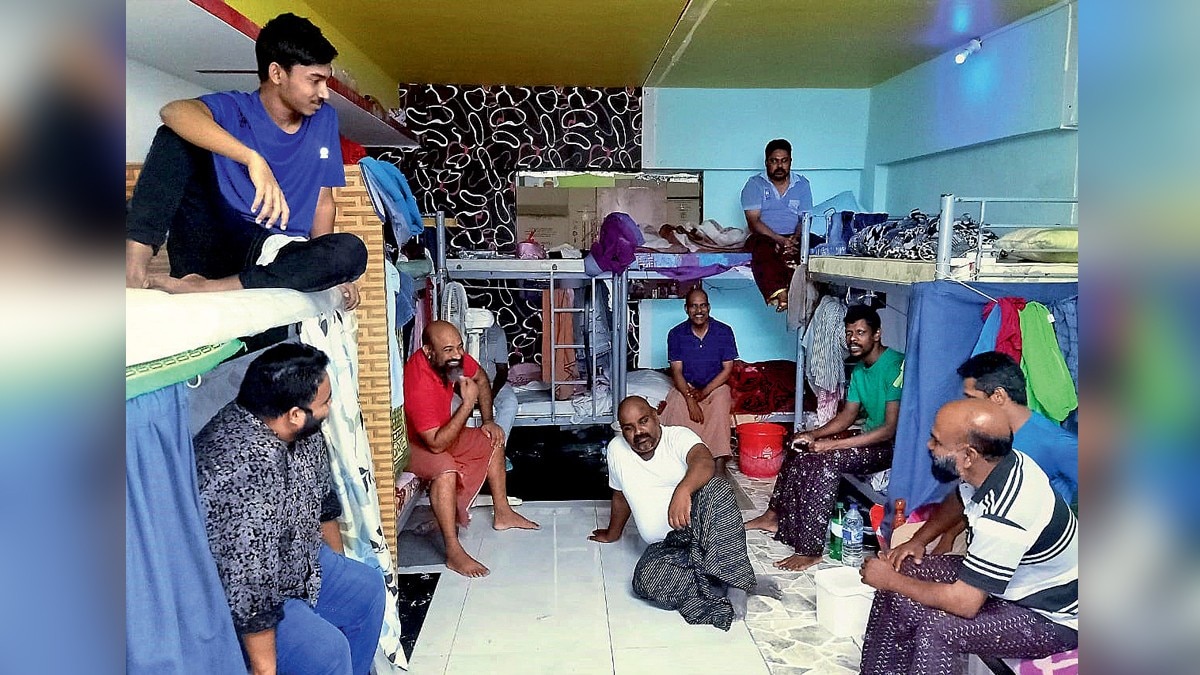 The last big crises of this scale Gulf NRIs faced were the Gulf Wars of 1990 and 2003. Before the first war, the Indian government had evacuated around 160,000 people from the region. This time round, the problem is worse. In the past few years, GCC nations have seen the rise of Islamic terror on the one hand and vociferous demands for localisation of jobs on the other. The growing discontent has forced several governments to introduce job reservation. Saudi Arabia implemented the ‘Nitaqat’, or nationalisation, policy in 2016, aiming to give priority to locals in jobs. Earlier this month, Oman, where 97,000 NRKs are employed, announced that all expats working in the government sector will be replaced by its own nationals.

According to Oman government data, of over 1.3 million foreign nationals working in the country, more than 53,000 had jobs with the government.

M.P. Varghese, 56, a businessman based in the Gulf for over three decades and owning shopping malls in Bahrain and Saudi Arabia, predicts perilous times ahead. All GCC countries, he says, are planning to revoke work permits to expats; stringent norms for running businesses may be the next step. “It seems our road to the Gulf ends with COVID-19. We need to explore newer destinations for migration,” says Varghese.

COVID-19 has so far infected 4,000 NRKs in the Gulf region; 54 deaths have been reported, 40 in the UAE alone as of May 7. For many, Kerala’s impressive Covid record, four deaths as of May 7 and the incidence of new cases down to zero on May 3,4 and 7, is added motivation to return home.

In the first phase of the evacuation, only persons shortlisted by the Indian embassies will be allowed to travel, with preference given to pregnant women, senior citizens with acute health problems, children and those with expired visiting visas. Among the returnees are 61,009 people who have lost their jobs, 9,827 pregnant women, 10,628 children and 11,256 senior citizens.

“The delay in evacuation has caused widespread discontent among Keralites here,” P.N. Baburajan, president of the Indian Community Benevolent Forum in Qatar, told india today over phone. Baburajan, 57, is from Thrissur. He has been living in Qatar for the past 36 years and runs a training centre for skill development. “Around 42,000 Indians have registered with our embassy in Qatar for return to India, and a majority of them are from Kerala. Their numbers may go up in the coming days; each passing day poses newer challenges,” he says.

NRKs in the Gulf have been the pillars of Kerala’s economy for decades. Their sudden return now, in many cases without a regular income or enough savings, presents a dire situation for a state and its people heavily dependent on remittance money. Kerala’s fiscal deficit was Rs 23,957.06 crore in 2018-19. At 3.4 per cent of the Gross State Domestic Product, it overshot the FRBM (Fiscal Responsibility and Budget Management) Act target of 3 per cent. A sudden drying up of money from the Gulf may hit the entertainment industry and the arts and literary worlds. Even charities and religious groups thrive in the state with generous sponsorship from overseas Keralites. The return of NRKs will also push up Kerala’s unemployment rate, which, according to the Centre for Monitoring Indian Economy, was 9.2 per cent in December 2019, against the national average of 7.6 per cent. The state has the highest unemployment rate among the youth (15-29 years).

Chief Minister Pinarayi Vijayan, however, affects optimism about the reverse migration. “So far, we have used our challenges as an opportunity. We are getting ready to tap the professional expertise of the returning NRKs for the rapid growth of industry in Kerala,” Vijayan told india today. He is planning to set up an expert committee to suggest models for the rehabilitation of the returnees through re-employment. “Kerala has made a mark of its own in the Covid pandemic. The world is now looking at us with great enthusiasm. We are even getting inquiries about investment opportunities.” The state government is establishing direct contact with potential investors. “With high-quality human resources and investor-friendly policies, Kerala can attract mega investments,” says Vijayan.

The Kerala government already runs rehabilitation packages for returnees who have worked for a minimum of two years abroad. Entrepreneurs taking a loan of Rs 30 lakh to set up businesses get 15 per cent subsidy on capital and a 3 per cent rebate on loan interest for the first four years for prompt repayment of the loan. Around 567 entrepreneurs availed of the scheme in 2018-19. The state’s Centre for Management Development offers guidance and technical support to migrants wanting to turn entrepreneurs.

An immediate concern, in some quarters, is the fear of transmission of COVID-19 from the returning NRKs. However, the Pinarayi government says that a protocol for screening them at the airports is in place and all returnees will be quarantined for 14 days, first seven days at one of the 437 corona-care centres (142,000 beds in all) and, on testing negative, another week at home.

Employment or income generation for the returnees will need to be the state government’s long-term priority. While the IT sector holds promise, tourism is still trying to emerge from the two consecutive years of floods. The services sector alone cannot generate enough jobs in a state that produces 210,000 graduates, 34,000 postgraduates and over 22,000 graduate engineers every year. To make the challenge even more daunting, assessing the full impact of COVID-19 and the lockdown on the state’s economy will take time.

Kerala’s Gulf dream appears as good as over. The state must now buckle up to make its returning natives feel at home, create income avenues for them and look at ways to capitalise on their skills and talent. For his remaining one year in office, Chief Minister Vijayan has his task cut out.