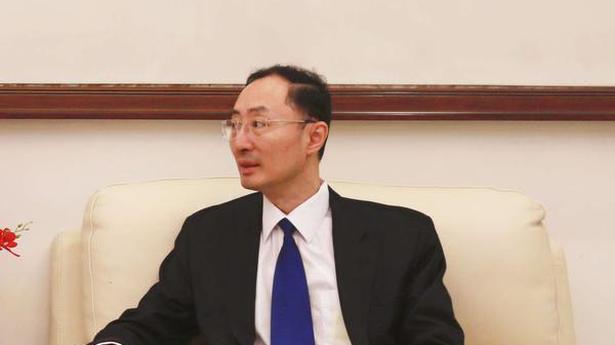 Reaching out to New Delhi amid rising tensions in Ladakh, China on Thursday said it was ready to work with India to deal with the stand-off. Beijing asked India to meet it halfway, asserting that “suspicion and friction” was a wrong path that goes against the fundamental aspirations of the people of the two countries.

In an interview to PTI, Chinese Ambassador Sun Weidong said India and China are able to manage their differences, but put the onus on New Delhi to ease the tension, calling upon the latter to avoid actions that may “complicate” the situation.

“We hope the Indian side meets the Chinese side halfway, avoids taking actions that may complicate the border situation and takes concrete actions to maintain stability in the border areas,” Mr. Sun said. He added that at present, the overall situation in the China-India border areas is “stable and controllable.”

The Indian and Chinese armies are locked in a bitter standoff in multiple locations in eastern Ladakh for the last six weeks, and the tension escalated manifold after 20 Indian soldiers were killed in a violent clash in Galwan Valley on June 15.

The Chinese Ambassador said “mutual respect and support” is a sure way and meets the long-term interests of both countries, but asserted that the onus was not on China to ease tensions in the region.

“China and India are both large developing countries and emerging economies with more than one billion people, and both have the historic mission of realising our own development and revitalisation,” he said.

“The onus is not on China. The Indian side crossed the LAC (Line of Actual Control) for provocation and attacked the Chinese border troops. The Indian forces seriously violated agreements on border issues between the two countries,” he said.

In the course of the interview, Mr. Sun repeated the Chinese government’s stand — which has been rejected by India — that Indian troops are responsible for the Galwan valley clashes., and indicated that the onus was on India to improve the situation in eastern Ladakh.

At a weekly media briefing, External Affairs Ministry spokesperson Anurag Srivastava held China directly responsible for the border standoff saying it has been has been amassing a large contingent of troops and armaments along the LAC since early May and conduct of the Chinese forces has been in complete disregard of all mutually agreed norms.

Mr. Srivastava also said the deployment of large body of troops and changes in behavior has also been aggravated by “unjustified and untenable claims” including over the Galwan Valley.

Emphasising that the path of “suspicion and friction” was wrong and goes against the fundamental aspiration of the two peoples, the Ambassador said, “China and India are willing and able to properly manage differences.”

In the last few weeks, both sides have held a series of diplomatic and military talks to cool down temperature even as Chinese military has increased its presence in all sensitive areas along the 3,500 km Line of Actual Control (LAC), the de-facto border.

Mr Sun said, under the guidance of the important consensus reached by the leaders of the two countries, “We are ready to work with the Indian side to properly deal with the current situation, jointly uphold peace and stability in the border areas, and ensure a sound and steady development of bilateral relations.”

In their informal summit in Chinese city of Wuhan in 2018, Prime Minister Narendra Modi and Chinese President Xi Jinping underscored the importance of maintaining peace and tranquillity in all areas of the India-China border region in the interest of the development of bilateral relations.

The summit had taken place months after a 73-day military face-off between the two armies in Doklam that raised fears of a war between the two Asian giants. After the killing of 20 Indian soldiers in Galwan clashes, India called it “a premeditated and planned action by China” and sent a veiled warning to China saying “India wants peace but if provoked, India is capable of giving a befitting reply”.

Referring to talks between foreign ministers of the two countries on June 17, the envoy said both sides agreed to “fairly address” the serious situation caused by the Galwan conflict and vowed to jointly follow the consensus reached at the commander-level meeting on June 6 to ease the situation as soon as possible.

Mr. Sun said China would not like to see a similar situation like the Galwan clashes, but repeated Chinese foreign ministry’s allegations that India was responsible for it.

The Ambassador said the two sides kept peace for decades in Galwan valley, but alleged that since the beginning of 2020, the Indian side has built facilities at or the crossing of the LAC in the Galwan valley, thereby “constantly changing the status quo of ground control.

On May 6, he claimed the Indian troops crossed the LAC in the Galwan Valley by night and trespassed into Chinese territory.

“They resorted to violent means to create a standoff between the two sides and built infrastructures in an attempt to maintain a permanent presence,” he alleged.

In his briefing, Srivastava said Indian troops have been patrolling the Galwan Valley for a long time and all infrastructure built by the Indian side has always been on its side of the LAC.

Mr. Sun said Chinese side lodged representations on multiple occasions to the Indian side through military and diplomatic channels following the incident and that India agreed to withdraw its personnel from the area.

The two sides held Lt General-level talks on June 6 during which they agreed on disengagement of troops from all the standoff areas.

India has been consistently maintaining that Galwan Valley clashes had taken place on the Indian side of the LAC.

The envoy also said actions taken by the Indian side are not in consonance with the spirit of several agreements signed by the two countries.

2020-06-25
Previous Post: Resurgence of virus in Europe as restrictions cross, warns WHO
Next Post: ‘The cash’s long past’: Wirecard collapses owing $four billion – Times of India