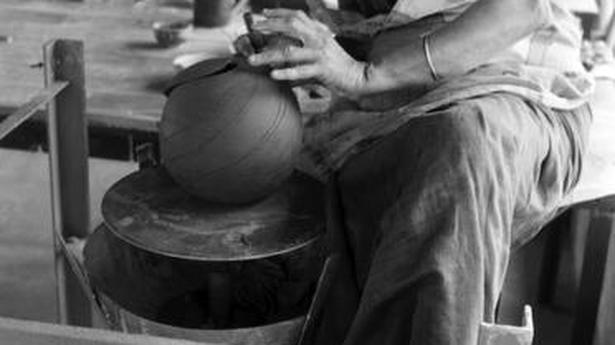 When Thomas Gray penned “Elegy Written in a Country Churchyard” he used the lines:

“Full many a gem of purest ray serene,

These words exemplify the life and work of ceramic artist and mentor Jyotsna Bhatt, who passed away in Vadodara on Saturday.

In her more than a 50-year career as mentor and practitioner, Bhatt constantly upgraded, refined and ennobled her art and created an original repertoire.

Simplicity and vividness were the best attributes to describe her art and ceramics. Simplicity, for her, meant silent sophistication. Nature was her leitmotif. She framed forms through her own understanding of nature and human experience.

A ceramic cat or owl was more than just an artwork for her. She glazed her ceramics in such an inimitable way, giving them evocative rugged and rough surfaces.

Jyotsna behen, as she was popularly called, considered Ira Chaudhri as the Guru of the Indian ceramic movement. In India where a lot of ceramic work has echoes of borrowing/imitation, Jyotsna behen’s intrinsic understanding of the relationship between form and the ferment became her signature.

Her sculpted entities around nature, the spontaneity of clay and the marvels of expression speaking through her plant forms, owls and smiling cats.

Born Jyotsna Shroff in 1940 at Mandvi in Kutch, she lost her father early but her uncle saw her aptitude in fine arts and encouraged her to pursue it.

Her journey at the wheel began in the 1960s in Vadodara. A high priestess of the world of minerals and fire and clay, she looked around her garden at Vadodara for stimulus and inspiration.

Married to celebrated artist and Padma Shri, Jyoti Bhatt, she always maintained that her husband was very supportive and her family played an important part in her achievements.

She studied sculpture under Prof. Sankho Chaudhuri at the famed M.S. University at Baroda and later ceramics at the Brooklyn Museum Art School in the U.S. Returning to India she taught at, and later headed the Department of Ceramics at her alma mater until her retirement in 2002.

Her sensitivity and her distinct sensibility was born of a deep understanding of the arts and crafts heritage of Gujarat. Her journey saw the genesis of a silent yet robust modernist potter, who was at home in the contemporary world and comfortable in her own skin, sharing secrets as she went along.

In her career of over five decades, Jyotsna behen had been a part of several group exhibitions, workshops, art camps, and solo shows.

Her last shows at Kolkata and Vadodara showcased a deluge of delightful creations. In her agile hands, inert matter like stoneware, signature matte glazes and minerals seem to awaken, smoke, stretch and settle into a position of poise and reflective reverie.

The quirky expression of a cat in sleep, the beauty of an opening bud, little vignettes from nature, her tall vases with a hint of the antiquated murmurs — each piece had its own tale.

In Delhi, most of her shows were held at Art Heritage, Triveni. She was also particular about her prices; didn’t want to get into the elitist markets and kept her prices reasonable.

Stoneware was her preferred medium, made with a limited palette of colours: burnt terracotta brown, teal and ash grey on a few variants of bulbs or platters or cats or quasi vases. She liked disparate elements to sit alongside each other. It allowed Jyotsna behen make coherent groups reflecting the connotations of nature’s effusions.

Once when asked about her process, she said: “I have always had a preference matte and satin matte glazes with mottled colour tones. Colours for me had always been a softer natural tone variety. I reduce my firing using copper oxides and their carbonates, tin oxide and titanium dioxide. As for oxidation firing or what I call normal firing, I like the play of ash and flames on the works, which enhance the forms.”

More than just a ceramic artist, she was a mentor, a pedagogue exemplifying humility, grace and wisdom. She has been a mentor to several ceramicists, all over India. Her incessant urge for novelty in botanical and animal forms kept her agog.

Her platters were a statement in visual dynamism, conditioned by the social and natural rhythms that she sought to portray.

She revealed an intuitive instinct for powerful concision, to give us nature’s ripples of flowers — blooming in grained, sandy textures, minimal yet minute to the detail. The bulbs she created are symbols of everyday reality, practical and beautiful in repose.

Pottery for Jyotsna behen was a direct, playful expression of the physical body of the maker and the beholder —a connection through form, design, and purpose.

She followed a prescribed system born of a rustic realism muted in prakriti’s poetry. Her sculptural sojourn in small quaint pieces upheld magic and caprice. India has lost a fine practitioner and doyenne in the world of ceramic art practices.

(The writer is a senior art critic)