“Homeschooling is not an easy option but it is definitely thinking out of the box,” says Kochi- based Cristelle Hart Singh who along with her husband Ravi Singh homeschooled their sons, 10-year-old Ishaan and eight-year-old Tej, based on child-led learning. “The child learns what he/she wants to learn as opposed to teaching them what we want them to learn,” she adds.

With the imposition of lockdown across the world to fight the Covid-19 pandemic, normal life has been thrown out of gear, affecting school-going children and their schedules. While virtual classrooms and online classes are back in focus, another non-traditional method — Home Schooling — is being discussed vigorously, especially when homes have become learning centres.

Mumbai-based Sharmila Govande says, “Homeschooling is based on a philosophy or approach that believes that children are natural learners and love to explore their curiosity, interests and passion. They have the ability to self direct their learning.” Sharmila is mother to three unschooling children and active in the homeschooling / unschooling circles in Mumbai and in organising events for “our tribe”.

There is a a growing environment — especially in cities like Bengaluru, Pune and Mumbai — in which children stay at home and are either taught a curriculum by the parents/a tutor, or learn as they grow, watching their parents and joining them in household chores and activities, depending on each family’s interpretation of non-formal education.

The oldest homeschoolers, Sharmila says, she knows of in India are in their 30s, “so it possibly began here three to four decades ago. No one has ever done a count, but I think there are roughly around 10,000 families across India.”

Looking at its history in India many British families homeschooled their children, pre-1947 often bringing tutors from England. Many expats continued doing the same after Independence and some Indian families were inspired by the system. “In fact pre-independence days, we have examples of Dr Anandibai Gopalrao Joshi (first Indian female physician), Savitri Bai Phule (first Indian female teacher) who were home educated. Of course there are many more examples,” says Sharmila. “I am not saying home schooling is for everyone. But this is how we choose to raise our children now,” says Jaimie Chandrasekhar who along with her husband, musician DJ Sekhar, and her mother-in-law decided to home school her seven-year-old daughter Kaamaakhya. “The three adults in the family decided on homeschooling.”

Jaimie had quit her job as a education counsellor while in the eighth month of pregnancy and had prepared to raise her first born “differently”. “We took conscious decisions and home schooling is one of those,” she says. Kaamaakhya was not sent to a play school but when she was four she wanted to join a school. “We put her in one but, in six months, we found that she was not as expressive as before. Kaamaakhya is fiercely independent and highly expressive,” says Jaimie adding that the family does not believe in concept of “punishment for being naughty”. “Raising a child, teaching, learning is not a power game between children and adults, parent and child.” 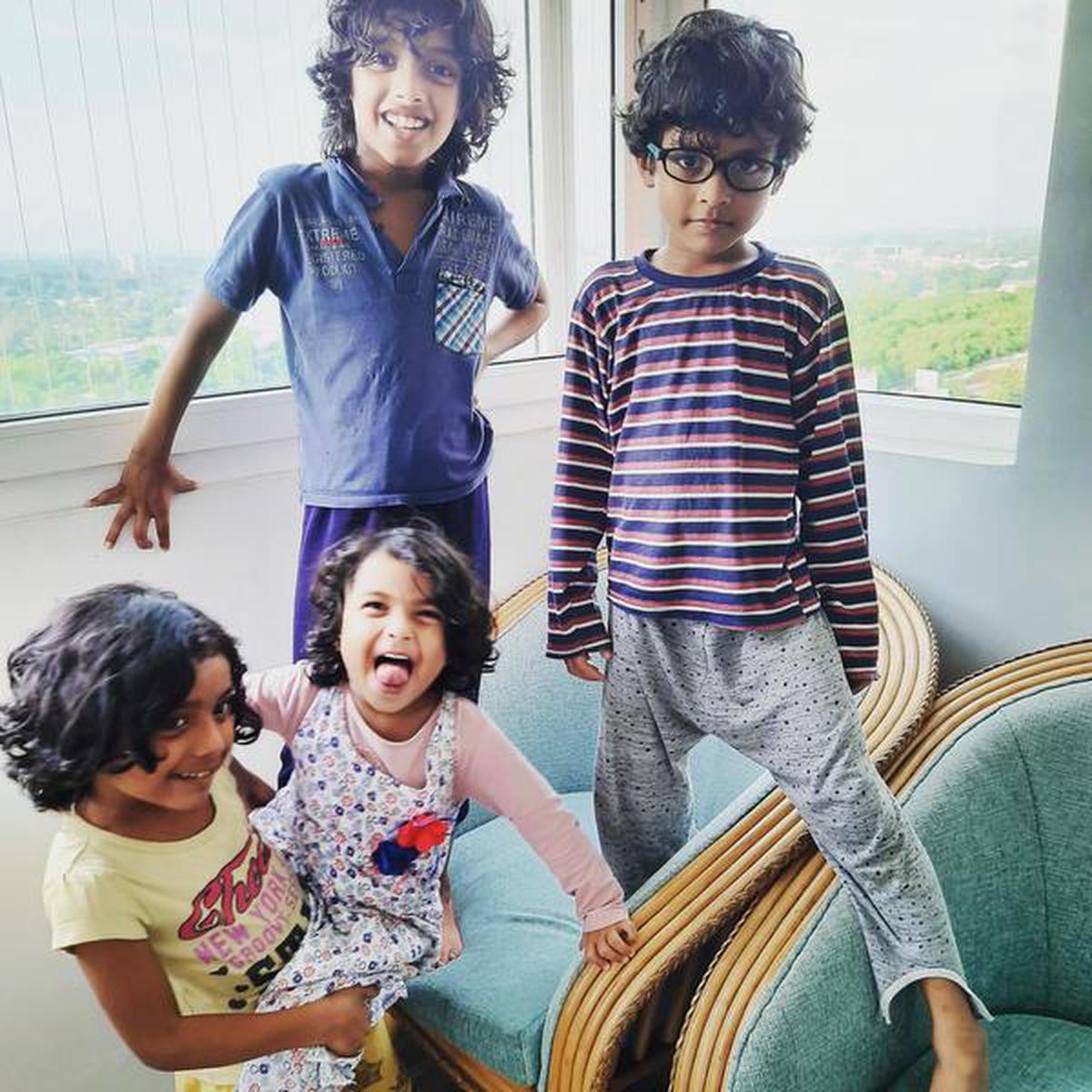 Jaimie’s mother-in-law was a teacher who also conducted home tuitions alongside her work. She never felt that a formal schooling was required for successful adulthood.

For Rustum Usman, COO, Spia Tech India Pvt Ltd, who develops products for Industrial IOT (Internet Of Things), “education is a democratic thing. We don’t compel the children to learn anything.” Rustum chose to homeschool his four children — Eisa Usman, Moosa Usman, Aaisha Usman and Fathima Usman — because of his “negative experiences” at early school and has now begun putting out videos on homeschooling, explaining what it requires, its benefits and its flip side.

A dyslexic, he had issues memorising multiplication tables and with spellings in school but “by the time I came to class 7, I had devised my own method of multiplication. I had become smarter in Math from self-learning,” says Rustum. In one video, he draws up a checklist of seven points required for homeschooling.

Rustum and his wife, Mariyam Vidhu Vijayan, follow the IGCSE syllabus as a basic curriculum for their children between three and eight years and some of their extra curricular activities are birding, programming and cooking.

His household follows “ a philosophy of software development,” where a schedule is charted and followed by each individual to suit their day. “If my son is curious about a math problem, he comes to me and I find a suitable time to help him learn,” says Rustum who has devised his own method of assessment. He has also tied up with alternative education schools like Bhoomi in Kochi for “non-academics” and used to take his children to the park for meeting with peer groups. His videos deal from teaching kitchen skills to saying ‘yes’ and doing away with ‘saying No’ culture.

Anand Bachchan, who set up Bhoomi, an alternative learning outfit, says that there are several reasons why families opt for home schools. Available educational options can be a disappointment, or families may not want children to face competition, religious choices or even distances. “Many families select a curriculum and teach children at home, which is the traditional method,” he explains, “but there is unschooling or de schooling where no curriculum is followed. The idea is that you are at home with the family and do things as a family — travel, cook, clean and learn along the way.

His personal idea of education is “to follow what interests the child”. At Bhoomi, the children follow “the Bhoomi rhythm” or flow of the day, something akin to a timetable. Children have fixed time for free play, song and dance, fruit time and an activity.

Currently the oldest child at Bhoomi is a 13-year-old and the learning environment is built on the contributions of parents and children at Bhoomi. “As we go on, the family decides about a child, if he or she wants to venture into formal schooling or pursue a syllabus from outside.”

Sharmila points out that many homeschoolers “have opted for mainstream higher education and have gone on to pursue degrees from colleges and universities. I understand that they do very well in whatever field they choose to study. I believe the main reason is because the choice is theirs and hence give their fullest to that experience.” She points out that the National Institute of Open schooling (NIOS) is considered at par with the CBSE curriculum and that there is also the option of giving Cambridge exams (IGCSE) as private candidates.

The obvious questions parents opting for homeschooling face is of a successful career for the child.

Sharmila says that stories abound of homeschoolers striking out careers in fields like graphic design, filmmaking, restauranting, software and app development, starting media projects and youtube channels. “many are artists, photographers and writers.”

Cristelle says that her son Ishaan, who dabbles with his father in carpentry, wishes to be an inventor and a chef. “ He learns Math that way, the boys are already talking about their careers.”

Open schools to choose from

Recently the Bhoomi parents organised a Zoom meet for the children during the lockdown. The parents believe that, for higher education, the children can choose from Open Schools where exams can be taken when the student is ready. “There’s no competition and no stress but some children need classroom authority,” admits Cristelle.

In homeschool communities, parents take turns to host children in their homes and teach them a certain skill. “Such communities are doing very well. Most cities have their local groups and events. We also have used social media effectively and hence have many WhatsApp and FB groups to ensure constant communication and sharing,” says Sharmila.

Meanwhile, during the lockdown, while the conventional school goers are coming to terms with the new normal, home schoolers are wondering what the commotion of is all about.

Lara Dutta was once as soon as in comparison to Priyanka…

Coronavirus: Can warmth or chilly have an effect on COVID-19…