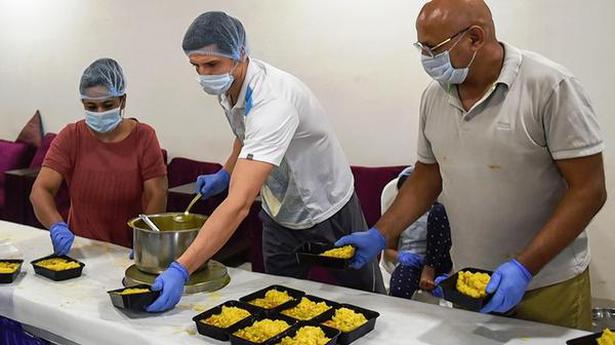 From Moldova with love in time of the pandemic

Moldovan tennis player Dmitrii Baskov has been hailed as an “Indian hero” after joining a campaign to feed Ahmedabad’s poor during the lockdown.

Baskov, a two-time Davis Cup player, arrived in India in January to visit a tennis academy before the advancing pandemic prevented him from returning home.

The 25-year-old, once a hitting partner for Wimbledon champion Simona Halep, has since been helping out by packaging food for the needy here in Ahmedabad. He is among a team packing bread, rice and other dishes at the Ace Tennis Academy, destined for the city’s slums and containment zones.

“My friend Pramesh Modi mentioned this (idea of feeding the poor) and I said yes, sounds great and the next day we did it and it continued day after day,” said Baskov.

“One hundred, 200, 300 packets and then we realised we are doing some great stuff. It is not a daily desire or action, it is now a natural act of helping. I am a sportsman and nothing more than that but the desire to help is always with me.”

“He (Baskov) wraps the rotis (bread) in the silver foil with absolute precision,” said Pramesh’s wife Ami Modi .“He is passionate and particular with what he is doing. Since the time he got to know of this act, he has joined us and is a hero.”

A volunteer at the tennis academy says Baskov serves as a “lesson in humanity”.

“He is an Indian hero and could be a role model for a number of Indians who have not come out of their houses to even help out in one way or the other,” said Mitul Parikh, who packs food alongside Baskov.