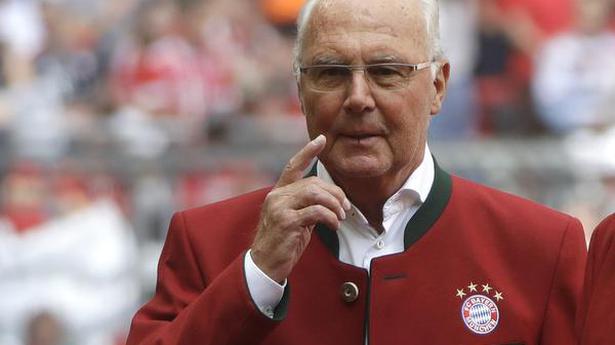 The case involved a complex trail of suspect payments between the German World Cup organizers, FIFA and Qatari soccer official Mohamed bin Hammam ahead of the 2006 tournament

Beckenbauer and other German officials who helped organize the 2006 World Cup had been subject to a FIFA ethics investigation opened in 2016. There was no time limitation on bribery prosecutions in FIFA’s ethics code until it amended the rules in 2018 to add a 10-year limit.

Cases against Theo Zwanziger, who once replaced Beckenbauer on the FIFA executive committee member, and Horst Schmidt were also closed, FIFA said on Thursday.

The case involved a complex trail of suspect payments between the German World Cup organizers, FIFA and Qatari soccer official Mohamed bin Hammam ahead of the 2006 tournament.

“Mr. Beckenbauer’s actions were related and limited to the bribe payment of (10 million Swiss francs) to Mr. Bin Hammam, which occurred in 2002,” FIFA ethics judges said.

Federal prosecutors in Switzerland had also investigated the case but their criminal trial collapsed in April last year, also because a statute of limitations was set to expire.

Beckenbauer was not indicted for that trial, after prosecutors accepted his health reasons, though he was set to give evidence as a witness by video link.

A dispute between FIFA and the 75-year-old Beckenbauer about his state of health was revealed in the ruling published on Thursday to explain why the ethics case was closed.

Beckenbauer’s lawyers said he could not be interrogated because he was “suffering from a progressive neurodegenerative disease (and) there is no expectation of a notable improvement.” Those details were provided in a March 2020 medical certificate also given to Swiss prosecutors ahead of the trial.

“Mr. Beckenbauer is not in a position to participate in lengthy oral questioning or proceedings,” his lawyers told FIFA.

However, FIFA judges noted that Beckenbauer had attended public events and given interviews last year, including events to celebrate 30 years since he coached West Germany to win the 1990 World Cup.

“His medical condition did not prevent him from attending events, traveling to foreign countries (despite the COVID pandemic), posing for pictures, making speeches, and giving at least three interviews,” FIFA judges said in their ruling.

“In particular, he did not appear to have any memory problems remembering matches of the 1990 FIFA World Cup, an event occurring 30 years ago, in vivid detail,” the ruling said.

Beckenbauer became the first player to both captain and coach a World Cup-winning team. He lifted the trophy for West Germany in 1974, when it also hosted the tournament.

A three-time European Cup-winning captain with Bayern Munich, he left to play for New York Cosmos alongside Pelé.

The judges also said “Beckenbauer invoked his right to silence and refused to provide the investigatory chamber with any written or oral statement” requested between 2015 and 2018.

Beckenbauer also refused to attend three interviews with FIFA investigators citing that he had undergone “open heart surgery and was suffering from several medical conditions.” Investigations began after an October 2015 report in Der Spiegel magazine claimed Germany’s bid to host the 2006 World Cup had a slush fund of 6.7 million euros (now $8.2 million) to buy votes.

“The whole thing was absurd and arbitrary from the start,” Zwanziger said Thursday in a statement to the DPA agency.

2021-02-26
Previous Post: It’s all about confidence, Axar Patel on phenomenal Take a look at outings
Next Post: Tempeh for combined firm: how plant-based proteins are encouraging cooks in India to experiment