With markets, malls, hotels, places of worship gearing up to ‘unlock’ on Monday in many States, strict guidelines on social distancing and regular sanitisation have been issued to continue the fight against coronavirus.

Maharashtra government has allowed all private offices to operate with up to 10% of full staff strength or 10 people (whichever is higher). In Kerala, all State government offices will commence functioning fully from Monday. So will the public sector and quasi-government entities.

Here is a list of State Helpline numbers. You can track coronavirus cases, deaths and testing rates at the national and State levels here.

Here are the latest updates:

Religious places open in Delhi after more than two months

Devotees offer prayers at the Bangla Sahib Gurdwara in New Delhi on Monday.

Religious places in Delhi opened after two-and-a-half months on Monday with devotees trickling in to offer prayers following the social distancing and sanitisation measures put in place by the management committees of the temples and shrines.

The famous Chhatarpur temple complex opened around 8.45 am with nearly 300 devotees visiting in the first hour, the temple authorities said.

Shahi Imam of Jama Masjid Syed Ahmed Bukhari said the mosque was not opened for the first namaz of the day due to the corona curfew till 5 am.

Teachers to report for exam duty from today

With the public exams set to begin from June 15 in Tamil Nadu, teachers handling classes 10, 11 and 12 in some districts have been asked to report for duty in government schools from today.

A government school teacher said that they have been instructed to start distribution of masks to students who will be taking the exams.

Eight more people have tested positive for COVID-19 in Mizoram, taking the total number of cases in the state to 42, an official of the Health department said on Monday.

Of the 244 samples tested on Sunday, 8 have come out as positive, he said.

The official said that the new 8 patients – 5 females and 3 males were diagnosed with COVID-19 at Zoram Medical College (ZMC) on Sunday night. 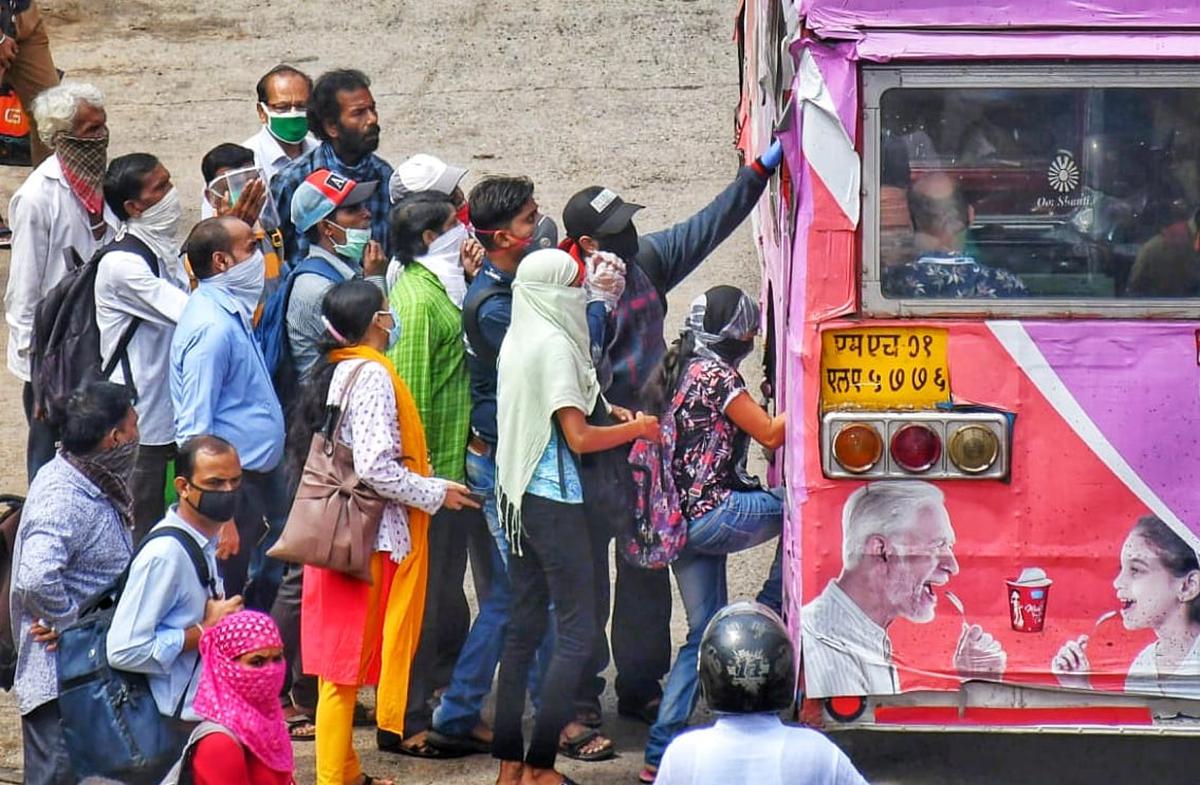 Long queues were seen outside bus stops as Brihanmumbai Electric Supply and Transport (BEST) buses began ferrying regular commuters on Monday as part of the Mission Begin Again of the Maharashtra State Government.

As of 10 a.m. as many as 2,132 BEST buses were plying as against the pre-lockdown schedule of around 2,514 buses. While around 250 buses were added to certain key long routes to mitigate the absence of the Mumbai local trains, passengers claimed they had to wait for as much as two hours for buses.

In many areas, passengers jostled for the limited number of seats available. as BEST stipulated only one person on each seat and five passengers to be standing.

“We are increasing the numbers of buses at this moment, we plan to have around 2,200 buses on the road,” a senior BEST official said. The BEST had said they had allocated around 250 additional buses on 81 long routes.

Devotees can only have ‘darshan’ at temples: Minister

Entry to temples will be restricted only to darshan now. Decision on allowing different sevas will be taken later in consultation with Central Government, said Muzarai Minister and Minister In-charge for Dakshina Kannada Kota Srinivas Poojary.

Talking to reporters after having darshan at the Kadri Manjunatha Temple, Mr.Poojary said devotees have been demanding opening of temples and to be allowed to offer prayers that would help in boosting their confidence in the fight against COVID-19.”Devotees will be relieved to see the temples open from today. They can have darshan by maintaining social distancing, hygiene and sporting face masks. Sevas will be allowed gradually in consultation with the Central Government,” he said.

With places of worship set to open on Monday, the State government has asked mosques to have staggered timings for Friday prayers and to disinfect mosques daily, even as the religious places have been asked to complete prayers in the minimum time possible.

Churches have been allowed to hold Mass on weekdays if the number of people are more for the Sunday Mass while restrictions have been placed on the Holy Communion.

The guidelines were issued by the Department of Minority Welfare, Haj and Waqf for the Muslim, Christian, Sikh, Jain, Buddhist and Zoroastrian communities. The guidelines for reopening temples had been announced earlier.

Eight new cases, including one in Mahe, were confirmed in Puducherry on Monday taking the cumulative total to 127. So far, 52 have been discharged.

Out of the four confirmed imported coronavirus cases reported on Sunday, three are from Sichuan Province and one from Shanghai, the National Health Commission (NHC) said. Two new asymptomatic cases from overseas were also reported on Sunday, it said.

As of Sunday, the overall confirmed cases on the mainland had reached 83,040, including 65 patients who were still being treated, with no one in severe condition. Altogether 78,341 patients have been discharged after recovery and 4,634 people have died of the disease, the NHC said.

New Zealand has no active cases of COVID-19 in the country for the first time since February 28, the country’s Health Ministry said in a statement on Monday.

The last person who was being monitored for coronavirus has now been released from isolation as he’s been symptom-free and is regarded as recovered, Director-General of Health Dr Ashley Bloomfield said in a statement.

The Delhi government has granted permission to places of worship to open from Monday.

At the Kalkaj temple, the local management has installed a sanitisation tunnel. 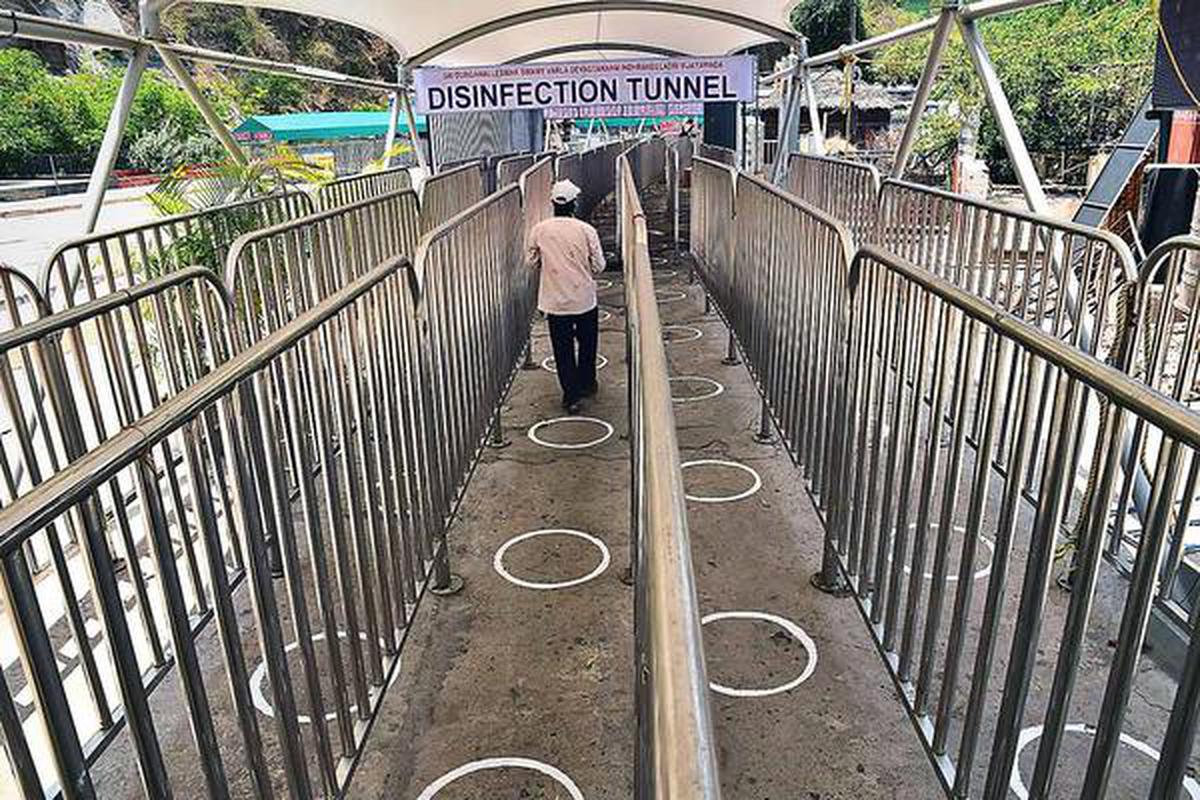 An advisory on the entry into the Jama Masjid has also been issued by Deputy Shahi Imam Syed Bukhari.

As malls and shopping centres in the national capital re-open on Monday after more than two months, they will be focussing on hourly disinfection of the common areas, contact-less shopping and physical distancing to prevent the spread of the deadly coronavirus.

There are around 100 big and small shopping malls in the national capital, the source of around ₹500 crore in revenue for the Delhi government, according to Brijesh Goyal, the convenor of the ruling Aam Aadmi Party’s (AAP) trader’s wing.

Temples and churches have announced guidelines for devotees as religious institutions are gearing up to allow their entry from June 9. All major mosques across the State will continue to remain closed for a few more weeks in spite of the government allowing them to reopen conditionally from Monday.

Bengalureans will be able to shop at malls and markets, dine at their favourite hotels and restaurants and head to places of worship from Monday as most such establishments are set to “unlock” themselves. However, signs of the “new normal” will be evident.

The Tirumala Tirupati Devasthanams (TTD) has decided to allow darshan at the temples under its purview in and around Tirupati on an experimental basis from Monday. However, the devotees need to book darshan tokens online or through SMS services.

The stage is set for reopening of places of worship, hotels, restaurants, other hospitality services, shopping malls (other than gaming centres and cinema halls) in Telangana from Monday, albeit with some restrictions to keep the spread of coronavirus under check.

Only 40% of restaurants may re-open

Only 40% of hotels in and around Chennai will be re-opening for dine-ins on Monday. Around 30% of the restaurant owners are in a wait-and-watch mood, while the rest are grappling with labour shortage and cash crunch.

The Puducherry Government has put in place several measures to cut down COVID-19 transmission risks as more high-patronage sectors of the economy such as the hospitality sector, restaurants, malls and places of worship reopen under lockdown relaxations announced by the Centre from Monday.

Also at the time table

‘Unorthodox’ assessment: A impressive tale of a lady…