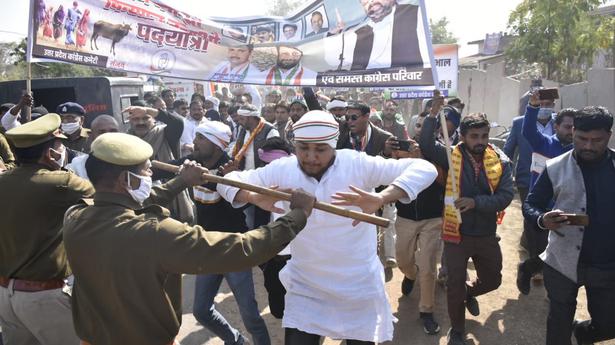 Additional SP Lalitpur Brijesh Kumar Singh said 55-60 Congress workers were detained and released in the evening for violating COVID-19 protocols and taking out a yatra without seeking permission.

Mr. Singh said an FIR was also lodged against the Congress workers.

The Congress party on Saturday started a foot march from Lalitpur to highlight the plight of cows and farmers in Uttar Pradesh. But barely had the yatra progressed that its State president Ajay Kumar Lallu, who set off with a pot filled with the asthiya (ashes) of a dead cow on his head, the police stopped the yatra and took him into custody.

Mr. Lallu and several other Congress leaders were detained by police. The party also said that many of their leaders had been placed under home arrest.

Called the “gai bachao, kisan bachao” (save cows, save farmers) yatra, the foot march planned to cover the Bundelkhand region of the State, and was scheduled from a gaushala in Saujana in Lalitpur district to Chitrakoot. As per the Congress’ plans, the yatra would pass through all seven districts of Bundelkhand before culminating on the banks of the river Mandakini in Chitrakoot where a tarpan ritual would be performed for cows.

When the Congress yatra was stopped by the police, Mr. Lallu, carrying a clay urn with “gai mata” stamped on it, was heard arguing with a police officer. “We want to hold a foot march. What is the problem in it?” he asked.

Before being packed off in a police bus, the MLA from Kushinagar said that there were no restrictions on Bharatiya Janata Party (BJP) leaders from going to West Bengal for holding rallies but Opposition parties in BJP-ruled Uttar Pradesh were being prevented from conducting yatras under the pretext of implementing laws.

“Is there any law in the country that bars us from taking out a yatra?” he asked.

“No force in the world can stop you from raising questions in the interest of farmers,” Ms. Vadra said in a tweet addressed to “dear soldiers of Congress”.