Bhuri Bai, a tribal girl from Madhya Pradesh, whose artwork are compiled within the guide Dotted Lines, tells her tale of resilience on World StoryTelling Day (March 20)

Bhuri Bai is not an unfamiliar name in the field of arts. She is the first tribal woman artist who dared to take the traditional Pithora paintings beyond the walls of the huts in her village in Jhabua, Madhya Pradesh. Albeit with a minor improvisation. She transferred the folk art form from the mud walls to huge canvasses and sheets of paper. It fetched her recognition, fame, awards and money.

Yet, a small book that she has co-authored with Debjani Mukherjee, research scholar with IDC School of Design at IIT Bombay, is giving Bhuri Bai the happiness she always yearned for during her years of struggle “Main aage badh paa rahi hoon (I am able to progress),” she says over the phone from Bhopal, where her vibrant art works influenced by the original Pithora paintings and tweaked as contemporary Bhil art, find a permanent place of pride in the Tribal Museum.

One of Katha’s recent publications, the book titled Dotted Lines is not just a compilation of 20 themed paintings that take you through a visual autobiography of Bhuri Bai. “It is a learning about the traditional Pithora art that hides a tale of empowerment, illustrates a unique culture and reveals how art can both be saved and be a saviour,” says Debjani.

The journey of the book started when she went to Bhopal as part of her research on indigenous art forms. During a soft launch of the book in Madurai (which was followed by the official release in Bhopal recently), Debjani narrated the story of Bhuri Bai who broke the gender barrier in her Bhil community (a migratory tribe from Madhya Pradesh, Rajasthan and Gujarat) to transform herself from an indigenous local painter to a contemporary folk artist. The typical dotted paintings in the book tell Bhuri’s story, of her childhood days and family, village life and surroundings, how art and Nature intertwined in their lives, and yet, the culture and customs followed by the Bhil people kept women away from painting their houses. The men believed girls, after attaining puberty, become ‘impure’, and hence the ritual of painting to receive blessings of their deity, Dev Pithora, was only the man’s prerogative.

Bhuri Bai says she would sit in a corner and watch the village priest and the male members in the family, make natural colours with flowers, clay, and seeds and then paint with them on the walls. The painting style would follow elaborate patterns and coiling designs. There was a calculation for dots based on seeds of maize (corn) that was grown in that belt, she adds, and has a striking resemblance to works of the Australian aboriginals. Through her paintings, Bhuri highlights how art attracted her but she continued to till the land till she moved to Bhopal as a daily wager at the Bharat Bhavan cultural centre. This proved to be a turning point because she met well-known Indian artist Jagdish Swaminathan who suggested she paint the traditional pithora art on a sheet of paper.

Bhuri Bai recalls she was nervous to start as she had never used paint brushes and acrylic colours but she soon conquered her fears and started painting her village life from memory.

The bright colours of her village festivities, the scenes of daily life, village architecture, the forests, flora and fauna, traditional attires and ornaments, the dances…. Soon she began incorporating elements of urban and industrial life and painted everything she saw around her and her contemporary themes converted the traditional and ritualistic Bhil pithora paintings into contemporary Bhil.

Says Debjani, “This is a classic case of art moving towards commercialisation not to kill it, the art but for its evolution.” In the traditional pithora art, one single wall of painting would depict series of scenes from a story, while in Bhil art every scene became an individual piece of work retaining the dotted style, she explains. When Debjani started her research on pedagogy of indigenous art education in 2014, she spent two years interviewing and documenting the work of 70-odd Bhil artists and studying their works displayed at the State Museum, Bharat Bhavan, Tribal Museum and Indira Gandhi Rashtriya Manav Sanghralay. That is when she met Bhuri and got to know her story. of breaking free from the community shackles that did not allow women to paint. “I trained under her for another two years learning to make the dotted paintings. My objective was to create awareness about indigenous artists and highlight their purpose, belief and practices that were responsible and holistic,” she says. 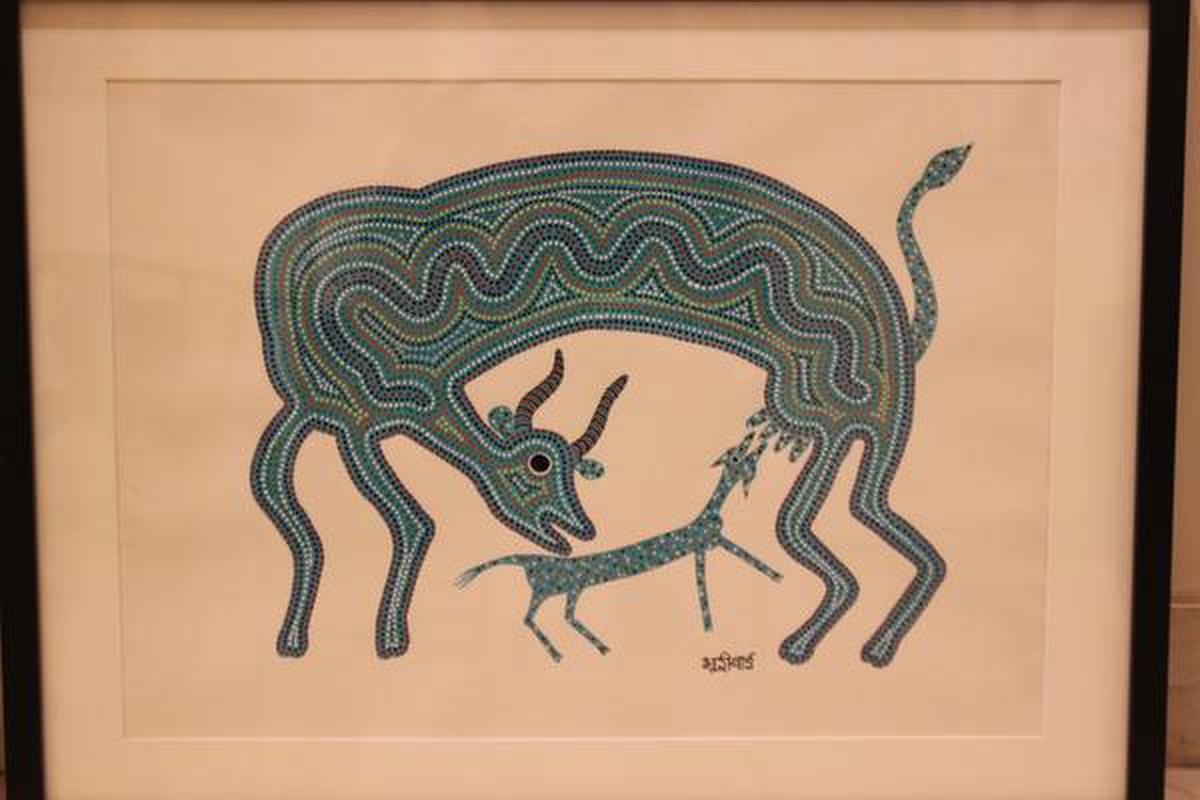 Once Bhuri Bai’s contemporary works began to receive global acceptance, she went back to her village to train the girls in the art form and encourage them to paint. “Our art is therapeutic and meditative,” says Bhuri Bai and today she trains about two-dozen women.

Debjani strongly feels indigenous art is shared heritage. “There is a need to support artists like Bhuri Bai who are keeping the art alive by teaching it to a wider section of people and trying to prevent careless copying of their hard-worked images,” she says.

Working with tribal artists through collaborations in order to guard against appropriation of indigenous art, Debjani came up with the idea of Dotted Lines. “It is Bhuri Bai’s first book aimed at defining her role as a teacher and artist within the community and outside as well and to tell the modern world how the art form can be kept safe in future,” says Debjani, who is now making an animated documentary film by the same name. 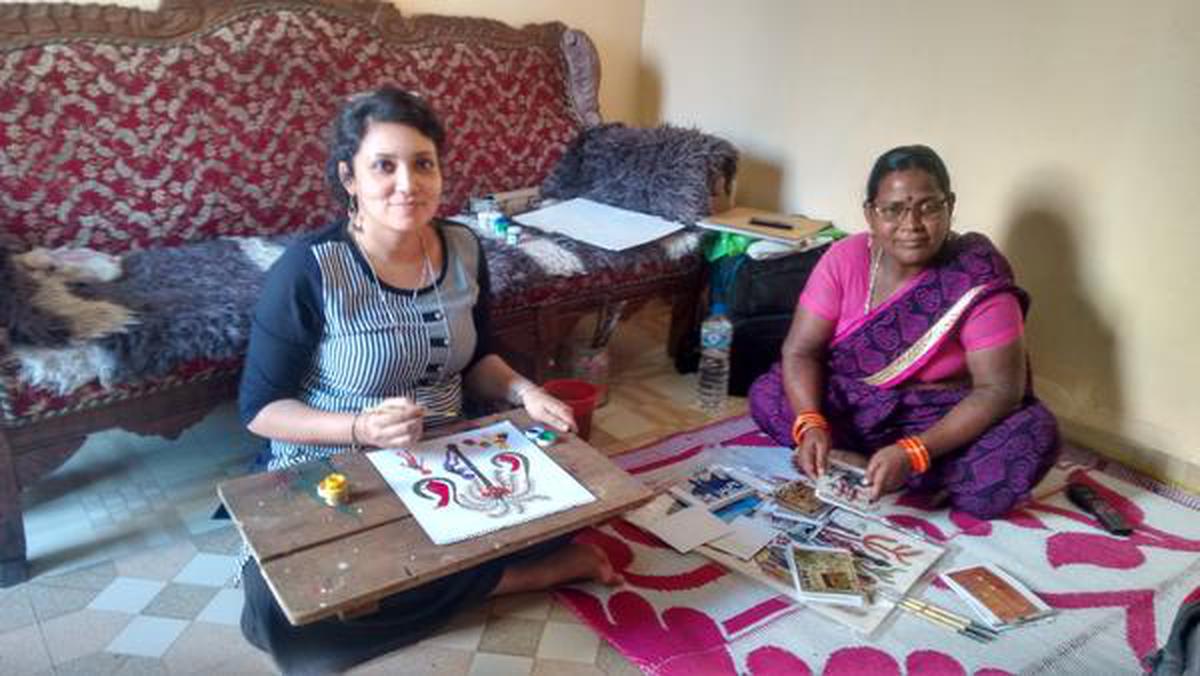 She also conducts therapy workshops for students using art as an effective tool for self-discovery and social change. “Such efforts help to bridge the gap between the modern industrialised world and the unique lifestyles of adivasis and save ancestral knowledge and wisdom,” she adds. “It helps you grow beyond.”

Her works have been displayed in galleries and museums of Europe, Australia and the US.

She was invited on presidential delegation to Australia for a workshop with Australian aboriginals and Indian tribal artists.

How To Start A Solar Business In India 2021

Submit-Brexit London goals to lure tech IPOs and SPACs in…

Stock futures soar after sure information on Gilead…

Chess | Nothing to split Earth and Space