The princely state may have long been gone, but royal tradition, it seems, is alive and kicking. Especially in Rajkot, where the 17th descendant of the royal family of Rajkot state in Gujarat, Mandhatasinh Jadeja, was crowned in an elaborate three-day ceremony in the concluding week of January. A grand spectacle, the raj tilak or coronation was held at the 225-acre Ranjit Vilas Palace. Led by Raj Pandit Kaushik Upadhyaya, 51 Brahmins poured the waters of 51 holy rivers mixed with 100 herbs from 51 pitchers to give the angrakha and dhoti-clad Mandhatasinh a ritual bath to the chants of the raksha mantra.

A nine-gun salute state under British colonial rule, the princely state in the Kathiawar Agency of Bombay Presidency was founded by Thakore Saheb Vibhaji Ajoji of the Jadeja dynasty in 1620. With 64 villages under its jurisdiction, the princely state acceded to the Indian Union in 1948. The royals lost their privileges in 1971, but held on to the illusions of grandeur. And the coronation of Mandhatsinh Jadeja was a royal salute to that bygone era.

(Clockwise from top, left) Mandhatasinh in the 100-year-old family silver chariot leading a procession of royals, priests and noblemen; the royal being given a ritual bath by 51 Brahmins; and priests performing the rajtilak ceremony. After elaborate rituals, obeisance to royal ancestors, ancient books, the janam patrika and weapons, Mandhatsinh sat on the gaddi his father Manoharsinhji Jadeja, a Congress leader and former minister for finance, youth and health in the state, had occupied till he passed away in 2018. Mandhatasinh’s great grandfather Lakhajiraj shared a great equation with Mahatma Gandhi, who was a student at Rajkot’s Alfred High School in the 1880s, when his father was appointed the deputy diwan of Rajkot.

Before his coronation, Mandhatasinh, resplendent in a Banarasi pink and blue achkan, sword and dagger tucked into his kamarband, led a procession riding in the family’s 100-year-old silver chariot. The procession was attended by several other royals, mostly from the Kathiawar region of Gujarat but also from Rajasthan, noblemen and priests. People in impressive numbers lined up both sides of the street to see and cheer the procession comprising 30 vintage cars and 10 chariots. Rolls Royce owner Henry Royce designed the last Rolls Royce of his career, the Star of India, for Mandhatasinh Jadeja’s grandfather. 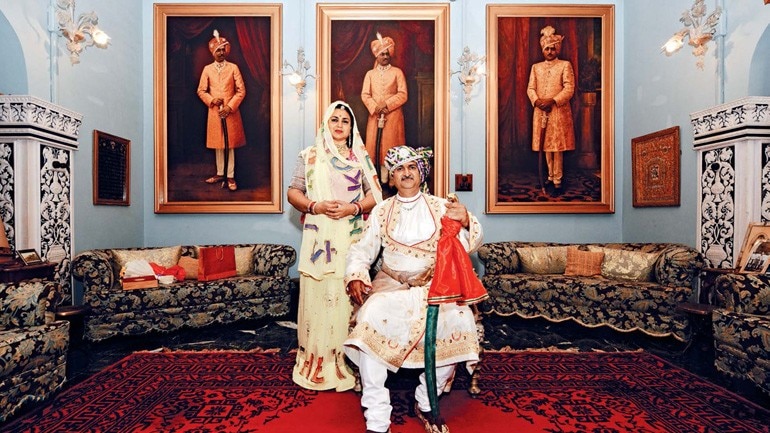 The highlight of the show, however, was a sword dance’, performed by 2,126 women, to the beats of Kathiawadi doha singer Brijdan Gadhvi and the Durga Stuti. Dhrutiba Jhala, one of the participants, spoke for all the women dancers when she said, This sword dance is not just a dance, it is a symbol of pride of the chivalrous heritage of Rajput women. The feat made it to the record books. As did the lighting of 7,000 diyas in the shape of the Rajkot royal state emblem.

Mandhatasinh’s wife Rani Kadambaridevi, who played a big role in planning the coronation, says: For some, it might be nothing more than an event, but for us and a large number of our former subjects, it was a very exciting and emotional revival of an ancient Indian custom reflecting our passion for keeping our heritage alive. Indeed, many people were overcome by emotion watching the royal procession that reminded them of the pomp that was once associated with their state. According to Mandhatasinh himself, royalty has been inalienable part of Indian tradition and it is essential to keep it alive for people who still reminisce about the royal era. Among the ancestors he draws inspiration from are Vibhaji, the founder of the royal house; Meramanji, who wrested Rajkot back from Mughal subedar Masum Khan in 1720, after he had captured it and renamed it Masumabad; and, of course, his grandfather, Lakhajiraj.

His coronation ceremony over, Mandhatasinh got up on stage and gave a speech promising to serve the people of Rajkot. Gujarat chief minister Vijay Rupani attended the event and took part in the ceremony. Prime Minister Narendra Modi, too, sent a message to the royal family: Rajkot state provided railways, irrigation and electricity to its subjects well before Independence. I wish the royal family continues to serve the people.

Votes and the CAA

Azhar to guide Pakistan in Tests, Babar named captain for…