Audi’s fourth-gen A8 arrives in India nearly two-and-a-half years after it was introduced in global markets. The new flagship sedan is larger than its predecessor, based on a new platform and is loaded with tech. So, has it been worth the wait?

The new A8 L wears its limousine heart on its sleeve. If the 10ft (3,128mm) wheelbase wasn’t enough, the rear overhang extends far out, making it look like a proper stretched sedan. What also helps is the window line, which stretches far back beyond the actual seating area of the cabin, giving it a curved, coupé-like shape. This test car sits on a set of rather racy five-spoke, 19-inch wheels, but that’s the only sporty touch you’ll see here.

As with previous A8s, there’s been no attempt at making this car look sporty or overly curvaceous. It is all business, though straight lines and creases, and bold details at the front and rear do liven things up. There is plenty of chrome all around too; it does deliver that all-important road presence for a luxury car.

The back seat is, of course, where you gravitate to in a car like this, and Audi has really gone to town here. First, there is no more bench seat and the split rear cabin is standard — a tall centre console runs between the two chairs, and houses the central AC vents, seat controls, the optional rear wireless phone charger, an optional mini-fridge located in the boot, and a small command centre that centres around a removable touchscreen tablet. This operates every single function of the rear seat — powered sunshades, sunroof, lights, climate control, media and the seats themselves.

The rear seats are what really set this ‘limousine’ class of luxury sedans apart from everything else on the market. Sure, the long-wheelbase E-class also gets reclining seats and added legroom, but the A8 and its competitors are in a whole different league.

Heating, cooling and massaging seats are the norm here, as are the entertainment screens, panoramic sunroof, and powered sunshades for the entire rear cabin. Though the sheer plushness of the cushioning might still fall a little shy of those in an S-class, it’s near impossible to fault the rear-seat comfort. Aside from the huge amount of adjustments you can make (including folding the front passenger seat forward) there is the optional foot-massage system, which is unique to the Audi. Built into the back of the front-passenger seat, this heated pad kneads your soles into relaxation.

Then there is the rear entertainment system. The screens are actually detachable Android-powered tablets replete with front-facing cameras, internet connectivity and full functionality. This means that not only can you access in-car infotainment functions, but you can also stream your favourite movies and even hold video conferences. 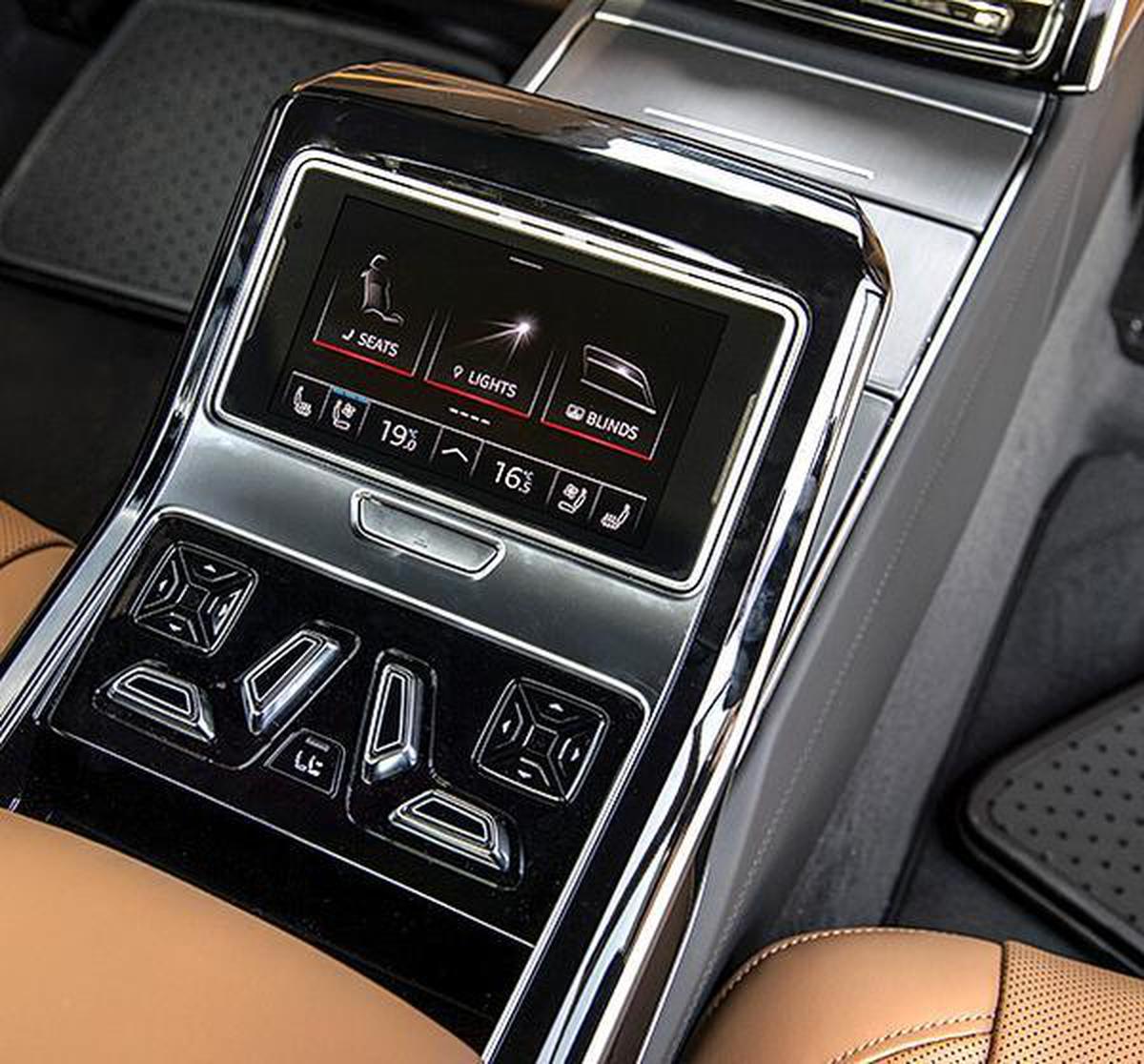 The front half of the cabin has a lot of the wow factor too, with air-con vents that glide gently open when you slide your finger across the touch-sensitive control strips. The dual-touchscreen MMI system is present, of course, and as we’ve documented in the past, it is feature-packed and looks amazing, but can be tricky to use on the move.

Things aren’t all that rosy from the driver’s seat though. The huge transmission tunnel means the driver footwell is very narrow and there is an audible squeak that emanates from somewhere behind the centre console on a bumpy road. Also, at certain times of the day, the huge plank of glossy black trim on the dashboard throws up big reflections. 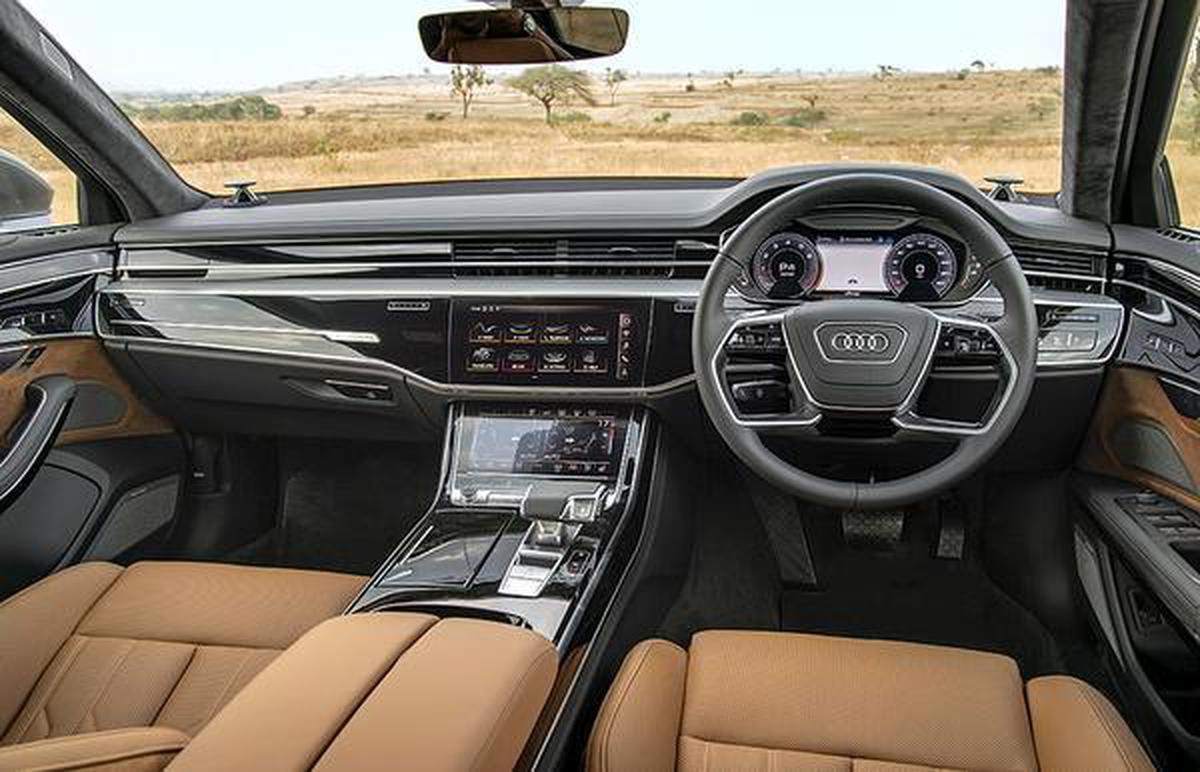 Coming to the engine, the A8 is available in 55 TFSI guise in India, and that means a 340hp/500Nm turbocharged petrol V6 engine with a 48V mild-hybrid system. An 8-speed automatic gearbox is standard as is the Quattro all-wheel drive.

Now, while this is the same engine as the Q8, the A8 is 160kg lighter than the SUV, and as a result it feels noticeably sprightlier. Audi claims it will do 0-100kph 0.2sec quicker than the Q8 too, taking just 5.7sec, and though that is pretty quick for a limo, this is not a sporty engine by nature. Yes, a hard launch will yield the requisite results, but in most driving situations, power delivery is gentle, smooth and even more refined. And while you’d want a bit of sport in the Q8, in this A8, you do not.

Similarly, the driving dynamics — you simply don’t want to put this car in Dynamic mode. Even when I wanted to go quicker, I found myself dialling just the powertrain into ‘Dynamic’ and leaving the steering and suspension at their soothing, mushy best. We have brought the A8 L onto some rather unsavoury rural roads, and, frankly, that extra degree of absorption you get from ‘Comfort’ allows it to ride flat over a patchy road. Credit must also go to the fitment of 19-inch alloy wheels that take some of the hit. The agility of the A8 L comes as a big surprise, and that’s mostly because of the optional rear-wheel steering. Pair that with a light and effortless feel at the wheel and you get a 5.3m sedan that tucks into traffic gaps like a hatchback. Also, when you’re changing lanes at high speed, stability isn’t compromised, as the rear wheels turn in the same direction as the front ones, rather than the opposite. 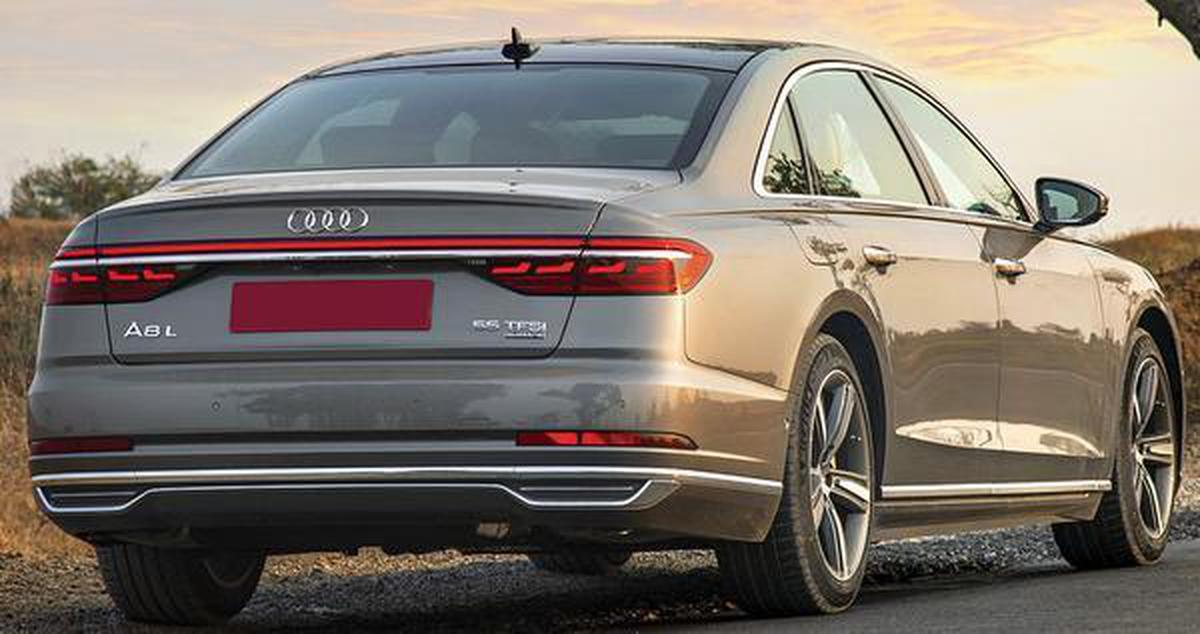 In summation, if you’re looking to buy your next limousine, you have got a very compelling option in the A8. Imported as a CBU with a starting price of ₹1.56 crore (ex-showroom, pan-India), the A8 L 55 TFSI is a bit more expensive than six-cylinder-petrol-powered versions of its locally assembled rivals, the S-class and 7 Series. The differentiator, like with the Q8, is the intense level of customisation. Customers have access to the full Audi Exclusive catalogue of paints, upholstery, trims and wheels, which should make sure that each car stands out. Moreover, though there are equipment options to choose from, the standard specification is very generous; so even if you don’t want to spend a rupee more than the starting spec, you will still get a comprehensive luxury experience.

Audi knows it has lost precious ground to Mercedes and BMW in this top tier of brand-defining flagship luxury sedans; and to make up for it, it has pulled out all the stops with the A8 L, offering a no-compromise package that’s sure to make an impact as large as the grille on its nose.