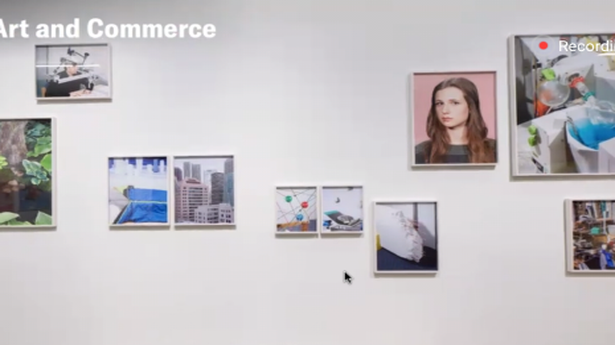 A vast grey space, with not a single person in sight — Mannheim’s Port25, a gallery which is one of the venues for Biennale für aktuelle Fotografie 2020, seems to be dominated only by its exhibits. Meticulously framed photographs, each narrating a different aspect of the complex relationship between art and commerce, are now frozen in a 360 degree video.

The photography biennale held in Germany, which was closed halfway through its course due to COVID-19, is now only a Zoom call away for photography enthusiasts around the world. Spearheaded by Chennai Photo Biennale, the curated “free to join” five-part tour, welcomes people across India to virtually walk through the festival, which is themed and titled, The Lives and Loves of Images.

The first in the series, titled Between Art and Commerce, walked one through the exhibits as Yasmin Meinicke (managing director of the biennale) and Kim Behm (curator at Port25) discussed how photography became a modern medium in the 1920s and 1930s. London-based freelance photographer Daniel Stier, whose works are on display, weighed in, taking participants through his work and process while shooting commercially. With Port25 as the first venue, each of the tours will look at a different venue which houses works spanning across themes. Each session will also feature a few presenting artists, and interactions and discussions would follow.

“As part of the Goethe-Institut’s South Asian visitors programme, 17 people including festival organisers, curators and independent practitioners from across South Asia visited the Biennale. During some of our earlier visits to other festivals, we realised that Europe somehow doesn’t have much of an idea of what’s happening in South Asia in terms of the arts,” says Shuchi Kapoor of CPB Foundation. Since then, their efforts have been directed towards establishing connections and building bridges. The five-part series was one of them. With everyone trying to normalise their lives by taking to the virtual space, using the live medium seemed to be timely.

“Now especially, people are expressing the need to connect with their own spheres and areas of interest ,” says Shuchi. This led to them bringing a piece of the Biennale to the audiences here, to cultivate interest. Shuchi adds that there is also a bigger question that they are trying to address: “What does the pandemic mean to the art world?” In such times of uncertainty, at least the conversation can continue, she feels.

The links to Zoom meetings will be updated on the respective days in chennaiphotobiennale.com

2020-04-10
Previous Post: When Christopher Nolan spread out about Aamir Khan’s Ghajini being ‘inspired by’ Memento: ‘I heard it was successful’
Next Post: Chess | I wish to play in subsequent Candidates event, says Vidit Gujrathi